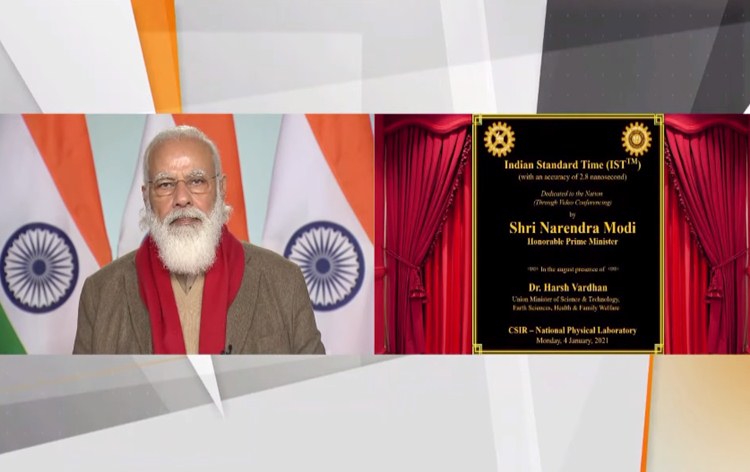 Prime Minister Narendra Modi has said that quality and credibility should be the pillar for brand India. Speaking at the inaugural address of the National Metrology Conclave 2021 through video conferencing today, he lauded the feats achieved by Indian scientists and technicians saying that Indian scientists has successfully developed two largest Covid-19 vaccination drive is going to begin in the country.

Highlighting the achievements of Indian scientists, the Prime Minister hailed the approval of two made in India COVID-19 vaccines. He said CSIR and other science institutes in the country came to the fore and found a solution to the global pandemic. He also affirmed that the country has developed respect towards scientific institutions due to the role played by them during the corona crisis. Mr. Modi asked CSIR scientists to interact with the students in the country and discuss about the country’s fight against the corona challenge. He said, this will inculcate scientific thought processes in the young minds and will also attract them towards this field.


Prime Minister also dedicated National Atomic Timescale and Bhartiya Nirdeshak Dravya to the nation and laid the foundation stone of the National Environmental Standards Laboratory. The National Atomic Timescale generates Indian Standard Time with an accuracy of 2.8 nanoseconds. Bhartiya Nirdeshak Dravya aims at supporting testing and calibration of laboratories for quality assurance, at par with international standards. The National Environmental Standards Laboratory will aid self-reliance in the certification of ambient air and industrial emission monitoring equipment.

The Prime Minister said, the country today has new challenges and goals. He said, the nation will have to develop new benchmarks and standards to add thrust to the vision of Atmanirbhar Bharat. He added that capacity building in the country will be determined by the standards and quality that we maintain. Mr. Modi asserted that the quality standards adopted by the country will determine its future path towards playing an important role at the world forum in the future.

Speaking about Metrology, he said that it is the foundation of methodology. He said it increases credibility of our products in the world. The Prime Minister said, emphasis should be made not only to boost demand of made in India goods but also to increase its acceptance. He added that the Bhartiya Nirdeshak Dravya will help manufacture quality products in the country. The Prime Minister said that the country is moving from an Industry oriented approach to Consumer based approach. He added that worldwide acceptance of Indian brands will boost the MSME sector in the country and will add to the exports and imports as well. Mr. Modi said that the value chain cycle of Science, Technology and Industry is key for the growth of any country. Science and Technology Minister Dr. Harsh Vardhan and Director General , CSIR , Shekhar Mande were also present on the occasion.

National Metrology Conclave 2021 was organised by Council of Scientific and Industrial Research-National Physical Laboratory, New Delhi which has entered into its 75th year of inception. The theme of the conclave is Metrology for the Inclusive Growth of the Nation.