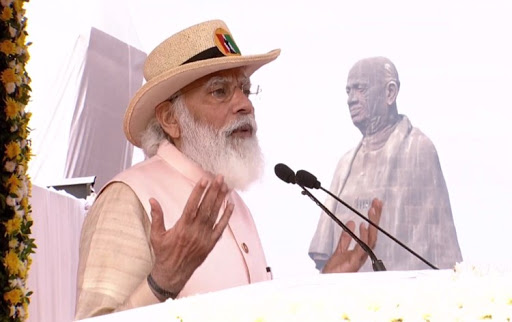 Prime Minister Narendra Modi today hit out at opposition parties for their alleged stand on the Pulwama attack last year, saying that when over 40 paramilitary personnel died in the attack these parties didn’t feel sadness. Addressing the Ekta Diwas Parade at the Statue of Unity in Kevadia Gujarat this morning, the Prime Minister said , today when I was watching the parade of officers, an image emerged in my mind. This image was of Pulwama attack. The country can never forget that when India was mourning the death of its sons… some people were not a part of that grief. They were looking for selfish gain in the Pulwama attack.Now that the truth has been accepted in the neighbouring country’s parliament, Indian opposition parties’ real faces have been exposed before the nation,PM Modi said.

Mr. Modi also called International community to unite against increasing threat of terrorism. The Prime Minister said that unity of the world community is necessary for the peace and prosperity of the world. He said that India had lost thousands of innocent lives in the fight against terrorism. He appealed to the people to unite for the peace and prosperity of the country and achieve the goal of Ek Bharat- Shresht Bharat.

The Prime Minister said that Jammu and Kashmir has marched towards development after removal of all barriers on the path, while the north east region is also on the path of development after the peace accord. Mr. Modi said that the Government is working for the welfare of the farmers, labourers and poor and striving to make them self-reliant.  He said that the nation is marching towards self-reliance in the defense sector. Today, he said, we are creating hundreds of kilometers of long roads, bridges and tunnels in border areas for the development of those regions. He also praised the frontline corona warriors and their fight against the pandemic.

Vice President M. Venkaiah Naidu today paid tributes to the Unifier of India, Sardar Vallabhbhai Patel on his 145th birth anniversary. In a Facebook post, Mr Naidu  called upon citizens to work together towards realizing the dream of Sardar Vallabhbhai Patel. He recalled the contributions made by Sardar Patel and urged the citizens, particularly the younger generation to revisit his legacy and remember his unparalleled contribution to building a modern India. He praised Sardar Patel for his monumental achievement of unification of India. Mentioning the creation of All India Civil Services, the Vice President said that it was another illustrious contribution made by Sardar Patel. He said that Patel had envisioned these services as the Steel frame of India that would further safeguard the country’s unity and integrity.

Paying his tributes to Sardar Patel, Defence Minister Rajnath Singh said, today we need to reiterate the resolve that we will always dedicate ourselves to uphold the Unity,  Integrity and Security of the nation.

Information and Broadcasting Minister Prakash Javadekar has greeted people on Rashtriya Ekta Diwas. In a tweet, Mr Javadekar paid tribute to Sardar Patel and said the Iron Man sacrificed everything for the Unity and Integrity of the Nation. He urged people to visit the Statue of Unity this year.