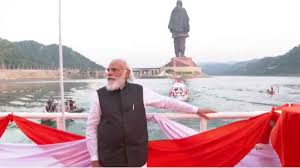 Prime Minister Narendra Modi on Friday flagged off Ekta Cruise Service, a ferry ride from Shrestha Bharat Bhavan to Statue of Unity in Kevadia in Gujarat.The 40-minute ride can be covered by a boat which can ferry 200 passengers at a time.
An official release said that New Gora Bridge has been built especially for the operation of the six-kilometre ferry service. A boating channel has been constructed to provide boating services to tourists visiting the Statue of Unity.

PM Modi is on a two-day visit to his home state Gujarat to mark Rashtriya Ekta Diwas, the birth anniversary of Sardar Vallabhbhai Patel.
Earlier in the day, he inaugurated Sardar Patel Zoological Park, popularly known as Jungle Safari, in Kevadia.
Sardar Patel Zoological Park has been set up near the 182-metre Statue of Unity.The Prime Minister, accompanied by Gujarat Chief Minister Vijay Rupani and Governor Acharya Devvrat, took a tour of the zoological park.