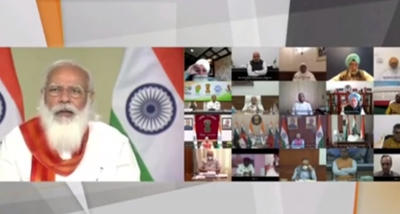 He emphasized that entire Guru traditions along with Guru Tegh Bahadur’s life and lessons should be made a part of these celebrations. Speaking about the Sikh Gurus’, Mr. Modi asserted that millions of people including Sikhs and others are walking the road shown by these Gurus. Prime Minister chaired the meeting of the High-Level Committee to commemorate the 400th Birth Anniversary of Guru Tegh Bahadur through video conferencing.

Home Minister Amit Shah was also present during the meeting. Year-long calendar of events planned to mark the special occasion was also discussed during the meet. The High Level Committee was constituted by the Centre on 24th October last year, to approve policies, plans and programs related to the commemoration of the  birth anniversary. It has 70 members including the Prime Minister as Chairman.

Night curfew to be imposed in four districts of Uttar Pradesh from today
Vaze puts Deshmukh, Parab in dock in explosive letter to NIA court
Comment