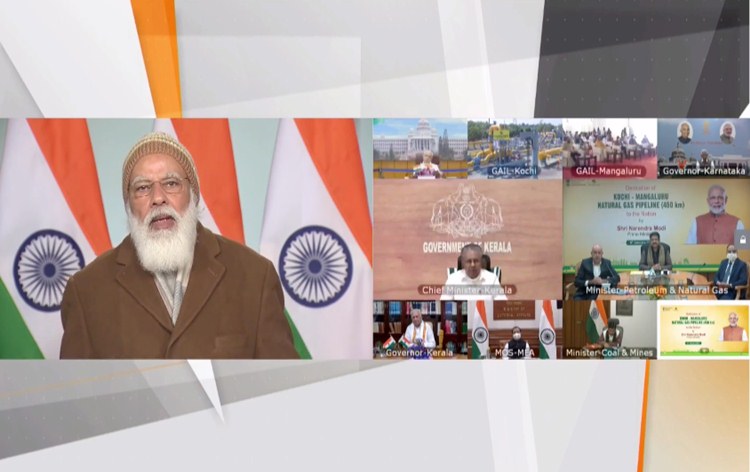 Prime Minister Narendra Modi has assured the nation of providing clean energy by envisaging One Nation, One Gas Grid programme.

Virtually inaugurating the 450-kilometre long natural gas pipeline from Kochi in Kerala to Mangaluru in Karnataka, the Prime Minister said, his government has accelerated reforms in the oil and gas sector, improved accessibility of the renewable energy and completed infrastructure needs of the sector at a faster pace.

He said, the policy initiatives of his Government has reduced dependency on kerosene in the states due to the increased usage of cooking gas.

The Prime Minister informed that there were 24 crore LPG connections till 2014 and since then in six years 24 crore new connections were added. Under the Ujjwala scheme, eight crore connections were provided to the poor. During the lockdown due to the pandemic, the Central Government provided 12 crore free cylinders.

The pipeline connection between Kochi and Mangaluru, he added, will help provide 21 lakh new piped gas connections. On blending of ethanol with petrol, the Prime Minister said that the target is to add 20 per cent ethanol with petrol in the next 10 years. He also said that the share of natural gas in the energy basket will be raised from the current 6.2 per cent to 15 per cent.