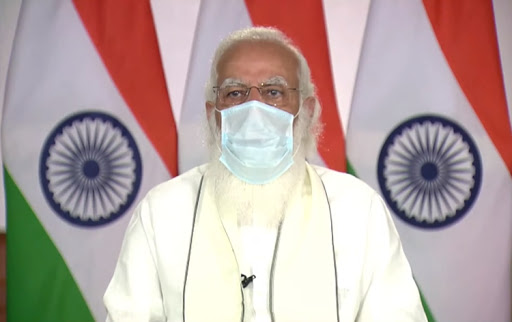 Prime Minister Narendra Modi has assured Centre’s full support to all the states in the fight against COVID-19. Interacting with Chief Ministers of 10 states and 1 Union Territory in a meeting to assess the COVID situation specially in areas reporting high number of COVID cases, Mr. Modi stressed that if all the states work together as one nation, there will not be any scarcity of resources. The Prime Minister added that the Union Health Ministry is also in touch with the states and is monitoring the situation closely and issuing necessary advices to them from time to time.

On the issue of oxygen supply, Mr. Modi took note of the points raised by the states. He said, there is a continuous effort to increase its production and supply. He also highlighted that all the concerned departments and ministries of the government are working together to address the situation adding that the Industrial oxygen in the country has also been diverted to meet immediate requirements.

The Prime Minister urged the states to check hoarding and black marketing of oxygen and medicines. He said that every state should ensure free movement of oxygen tankers and make sure that they do not get stopped or stranded. Mr. Modi urged the states to set up a high-level co-ordination committee to carry oxygen to different hospitals of the state. He added that such Coordination Committees should ensure that as soon as there is allotment of oxygen from the centre, it can deliver oxygen as per requirement in different hospitals of the state without delay. The Prime Minister Modi stated that the Centre is working on all possible options to reduce the travel time and turnaround time of oxygen tankers.

In the same light, he highlighted the Oxygen Express initiative started by the Indian Railways and also cited the transportation of Oxygen tankers by Indian Air Force Carriers to reduce the time lag of transportation of Medical Oxygen in the country.

The Prime Minister also stressed on the need to scale up testing and continue with the vaccination drive amid the emerging situation. Highlighting few recent incidents of hospital mishaps, Mr. Modi urged for adherence to strict safety protocols. Addressing concerns of few participants, he asked the administration to continuously make people aware not to Indulge in panic buying.

Earlier, a presentation was given by Dr VK Paul of NITI Aayog, which highlighted the preparations being done to counter the new surge of infections. Dr Paul also presented the roadmap for increasing the medical facilities and targeted treatment of patients.

During the interaction, Chief Ministers of states briefed the Prime Minister about the steps being taken by respective State Governments in the current wave. They also noted that the directions given by the Prime Minister and the road map presented by NITI would help them plan their responses in a better way.