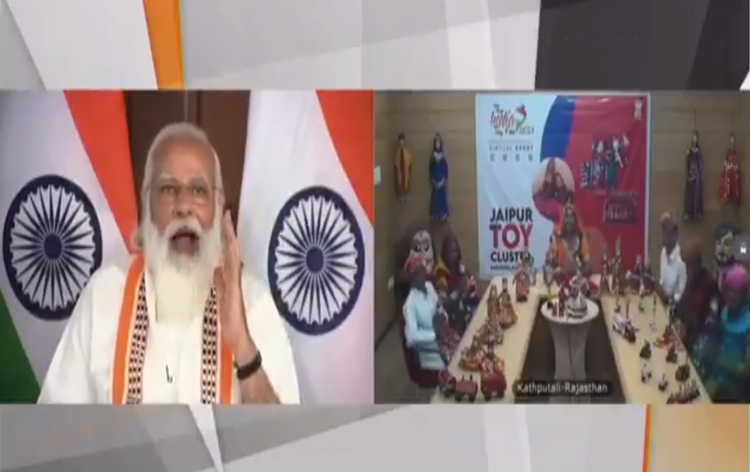 Prime Minister Narendra Modi today said the India Toy Fair is a major step in the journey towards building an AatmaNirbhar Bharat and strengthen the age-old traditions of the country.

Inaugurating the First India Toy Fair via video conferencing, Mr Modi said that most Indian toys are affordable and made from natural and eco-friendly items. He appealed to Indian toy manufacturers to make toys that are best suited for both ecology and psychology.

The Prime Minister said this first Toy Fair is not just a business or economic event, but a link to strengthen the country’s age-old culture of sports and games. He pointed out that people from across the nation have done extensive researches on the toys of Indus valley and Mohenjadaro.

Mr. Modi also pointed out that the world-famous Chess game,  originated in India. Mr Modi added that Chess was earlier played in India as ‘Chaturanga or Chaduranga’ and Ludo was also played as ‘Pachisi’. Mr. Modi said there is so much strength hidden in the toy industry and this strength will be increased multifold and the identity of the industry will be consolidated through the AatmaNirbhar Bharat campaign.

Prime Minister said there are deions in ures about many different forms of Lord Ram toys. He said local toys strengthen the feeling of unity among the kids. Mr. Modi said Indian toys not only entertain but also teach complicated scientific theories in a simplified manner. Lattu teaches gravity and balance, and Gullel teaches potential and kinetic energy.

He urged the parents to play with their children and said toys do play a vital role in the learning process of children.

The Prime Minister urged katputli makers of Jaipur to try new ways to reach and teach children like making short skits to encourage children to wash hands and wear masks.

More than 1,000 exhibitors are participating in the fair. Speaking on the occasion, Textiles Minister Smriti Irani said the Toy Fair will see pavilions by 11 partner states and 100 speakers including experts and industry specialists. She said it is Prime Minister’s inspiration and direction that has led to the India Toy Fair.