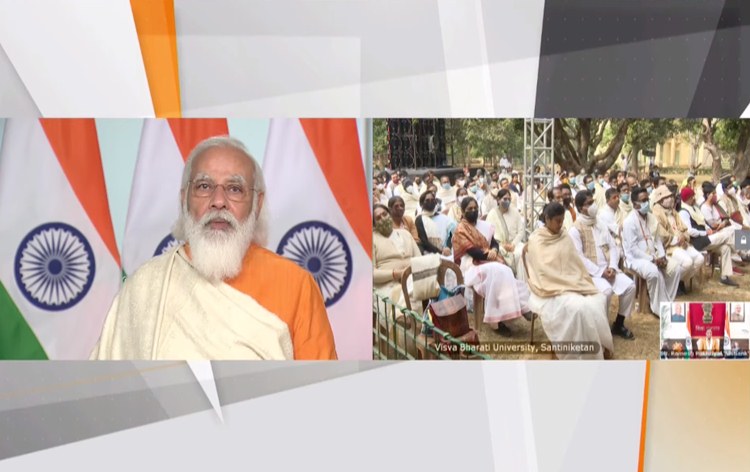 He said, India is the only major country which is moving in right direction to achieve environmental targets set under the Paris Agreement.

It is also leading the world in environmental protection through International Solar Alliance.

Prime Minister Modi was addressing the centenary celebrations of the Visva-Bharati University in Shantiniketan through video conferencing.

The Prime Minister is the Chancellor of the University.

He said Gurudev’s vision for Vishwa Bharati is also the essence of Atmanirbhar Bharat, which is the path of India’s welfare for world welfare.

Prime Minister Modi said Gurudev wanted  that the world should benefit from what is best in India and that what is good in the world, India should also learn from it.

Founded by Gurudev Rabindranath Tagore in 1921, Visva-Bharati was declared a Central University and an Institution of National Importance by an Act of Parliament in May 1951.

Gurudev founded the University with a noble vision. Visva-Bharati acknowledges India’s obligation to offer to others the hospitality of her best culture and India’s right to accept from others their best.

The University follows the pedagogy devised by Gurudev Tagore, though gradually it evolved in the format in which modern Universities developed elsewhere.