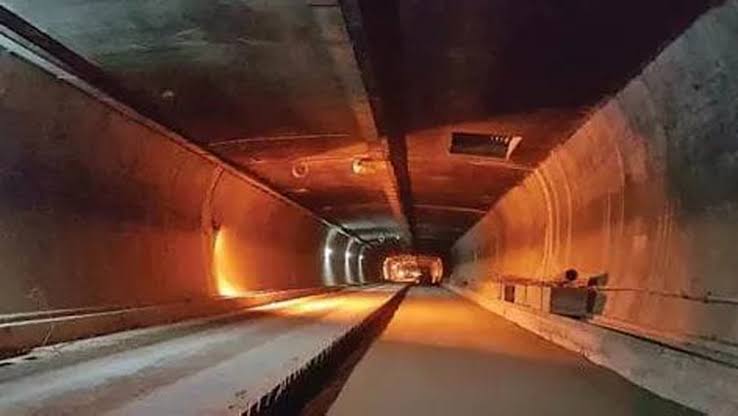 JAMMU:  Prime Minister Narendra Modi is likely to inaugurate Banihal-Qazigund tunnel which has been constructed at an approximated cost of Rs 2100 crore physically or virtually shortly.
Date of inauguration of the tunnel by the Prime Minister is likely to be finalized next week, official sources told the Excelsior.

However, a decision is yet to be taken whether the Prime Minister will inaugurate the tunnel physically or virtually in view of COVID pandemic which though has eased quite to an extent but is still not over.
Union Minister for Road Transport and National Highways Nitin Gadkari and Union Minister of State in the Prime Minister’s Office (PMO) Dr Jitendra Singh in whose constituency the tunnel starts will accompany the Prime Minister during inauguration of the tunnel.
“An engineering marvel. The 8.4 kilometer Banihal-Qazigund state-of-the-art tunnel is all set to be dedicated to the public. This will provide all-weather connectivity to the commuters across the region,” Dr Jitendra Singh said in a tweet this morning.
However, in case the Prime Minister is pre-occupied, Nitin Gadkari might inaugurate the tunnel along with Dr Jitendra Singh and Lieutenant Governor Manoj Sinha, sources said.
“If the visit matures, it will be the Prime Minister’s first tour of Jammu and Kashmir post-abrogate of special status of the erstwhile State and its bifurcation into two Union Territories of J&K and Ladakh,” sources pointed out. However, chances are that the Government might prefer inauguration of the tunnel through virtual mode keeping in view the COVID pandemic.
The double tube 8.5 km long Banihal-Qazigund tunnel along the 270-km Jammu-Srinagar National Highway has gone through various testing commissioning processes and is almost ready for inauguration any time.
The work on the Rs 2100 crore project was started in June 2011 by Navyug Engineering Company and on completion would reduce the road distance between Banihal in Jammu province and Qazigund in south Kashmir by 16 km and will bypass Jawahar Tunnel and Shaitan Nallah, which are prone to heavy snowfall and slippery conditions during winters.
All required equipments including ventilation and electric system have been installed in the tunnel and round-the-lock work is on to give final touch to the project before its inauguration, sources said.
They added that the tunnel is trafficable at the moment and is going through the final stages before it is dedicated to the people of the Union Territory.
The tunnel, according to sources, can be inaugurated any time by the month end.
Sources said the constructing company had also received a nod for the trial run of the traffic through the tunnel which was constructed using the state of the art technology.
They added that the tunnel is a masterpiece of engineering and has been constructed from Austrian tunneling method (ATM).
<span;>“The tunnel has been built on the Build Operate and Transfer base system with a state of the art exhaust system to remove gas and bring in fresh air,” sources said.
According to them, 126 Jet fans, 234 CCTV modern cameras and a firefighting system have been installed in both tubes of the tunnel.
“A corridor between two tubes after every 500 meters inside the tunnel has been built and this can be used in case of any emergency in either tube,” sources said.
The existing road tunnel below the Banihal pass (Jawahar tunnel – the gateway to Kashmir), has been a bottleneck on the highway, the only all weather road linking Kashmir with rest of the country, due to its elevation of 2,194 m (7,198 ft) and limited traffic capacity.
The new tunnel’s average elevation at 1,790 m (5,870 ft) is 400 m lower than the existing Jawahar tunnel’s elevation, which would make it less prone to avalanches and fulfills the dream of expressway between Srinagar and Banihal.
The work on the tunnel was delayed for several reasons in the past 10 years and at least five deadlines were missed due to the unexpected land condition inside the tunnel, alleged financial crisis in the construction company and some issues related to local landlords and company workers, which led to a number of work shutdowns in the tunnel project.
Sources, however, attributed the difficult geographical terrain and inclement weather conditions during winters as the primary contributors for the delay in completion of the mega project.