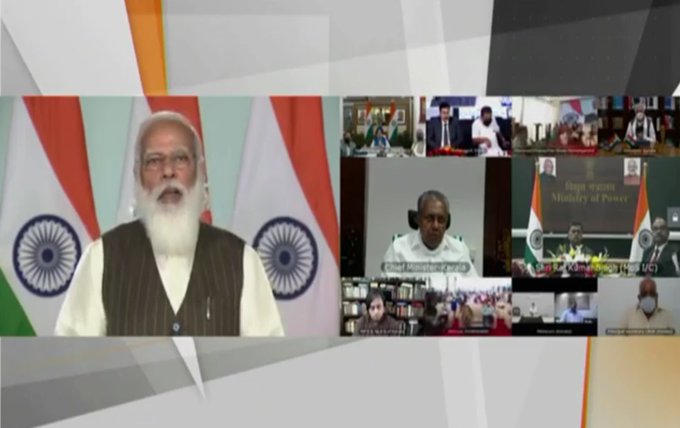 Prime Minister Narendra Modi inaugurated and laid the foundation stone of key projects of power and urban sector in Kerala  through video conferencing last evening. The Prime Minister said that these projects will be major milestones in Kerala’s growth trajectory. The new projects will, in fact, empower the beautiful state of Kerala. He added that the people of Kerala contribute significantly to our nation’s progress.

The Prime Minister dedicated the Pugalur – Thrissur Power Transmission Project to the nation. The project that was completed at a cost of 5070 crore rupees will enable Thrissur district to be the major power hub of Kerala. This will be pivotal in meeting the rising energy demands of the state.

The Prime Minister also dedicated to the nation the 50 MW Kasaragod Solar Power Project,  developed under the National Solar Energy Mission. He opined that this will play a crucial role in  meeting the nation’s green energy targets.


The Prime Minister said our gains in solar energy ensure a stronger fight against climate change, a boost to  country’s entrepreneurs. He said farmers are also being connected with the solar sector to make our Annadatas as Urjadatas. Under PM-Kusum Yojana, over 20 lakh solar power pumps are being given to farmers.  He added that in the last six years, India’s solar energy capacity has increased 13 times. India has also brought the world together through the International Solar Alliance. The Prime Minister  said our cities are engines of growth and power houses of innovation. Our cities are seeing three encouraging trends: technological development, favourable demographic dividend and increasing domestic demand.

The Prime Minister also laid the foundation stone for the Integrated Command and Control Centre at Thiruvananthapuram. The control centre built at the cost of 94 crore rupees will act as the control room integrating various departments in case of any contingency. In addition to this the Prime Minister also laid the foundation stone of the Smart Roads Project in Thiruvananthapuram. This project will transform the roads of the state capital to international standards. Mr Modi also inaugurated a Water Treatment Plant at Aruvikkara. It will boost the  supply of drinking water in the capital city. Around 30 lakh people will  benefit from  this project.

The Prime Minister said that the Central Government has implemented numerous projects for the welfare of fishermen community in the state. The central budget has alloted a considerable share for the construction of a fishing harbour in Cochin. During the event the Prime Minister annotated the lines from a poem of the popular Malayalam poet Kumaranasan.

The Prime Minister said that the government aims to bring in development of all sections of the society without any barriers of religion and caste.

Chief Minister of the state Mr. Pinarayi Vijayan presided over the event. He expressed happiness that the projects could be completed in a time bound manner. He also said that the power sector in the state has grown enormously during the present government’s tenure. The event was attended by Governor Arif Mohammed Khan, various central ministers, ministers from the state cabinet and people’s representatives.