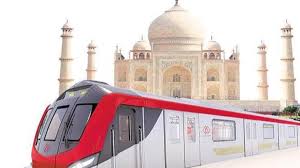 Prime Minister Narendra Modi today said that the Government’s Focus is on making small cities the axis of Self reliant India and the Metro project in Agra reflects this intention.

On this occasion The Prime Minister said that everyone is waiting for the Corona vaccine and it is not going to take too long but we have to strictly adhere to the social distancing guideline till it arrives.

Prime Minister underlined the Economic importance of Metro services and said that Metro will also help in the tourism sector of this ancient city and the Government’s focus is now to make the country vocal for local tourism.

He further added that Country has jumped from 65 th place to 34th place in travel and tourism competitive index.

Mr.Modi said that till 2014 only 225 km Metro line was in operation in India and within the last 6 years Metro is now running on more than 400 KM line in the country. In UP alone work on 7 metro lines are underway.

Taking about the various development projects running in western UP, the Prime Minister said that first Rapid Rail system is under construction from Delhi to Meerut and many other development works including Greenfield airport are going on in western part of Uttar Pradesh.

He said that the urban middle class of the country is getting many facilities from the Government in terms of subsidy on home, health card, loans and other monetary help.

The PM said that Spending on connectivity and infrastructure is now the highest in the country and steps are being taken to attract foreign investment in this sector.

Uttar Pradesh Metro Rail Corporation has set a deadline of five years for the completion of two corridors of Agra metro which will connect all the major tourist destinations of the city.

The Agra metro project will have two corridors with a total length of 29.4 km and will cost around Rs 8,379 crores.

MD of UPMRC Kumar Keshav told AIR that it will take around 3 years for the first metro train to run on the priority section between Tajmahal to Jama Masjid.

He said that initially Metro will be available at every 5.30 minutes and it will also help in decreasing the pollution level of the city.
Agra Metro project will benefit Agra’s population of 26 lakh and also cater to more than 60 lakh tourists who visit the historic city every year.