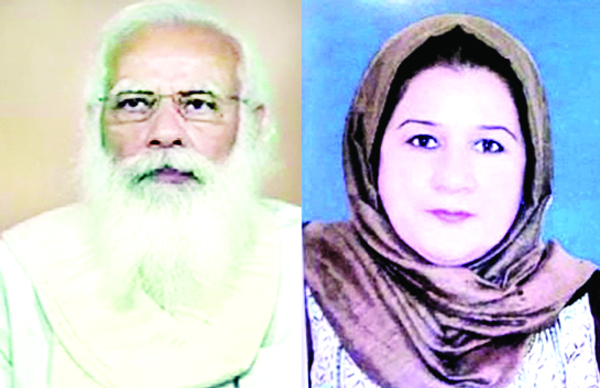 Jammu: Prime Minister Narendra Modi today interacted with a group of doctors from across the country including a Kashmiri Gynaecologist through video conferencing to discuss the COVID related situation.
In that interaction, Dr Tazyeen Younis who is a Gynaecologist at CHC Chanapora-a dedicated COVID hospital in Srinagar catering to the patients of district Budgam-also participated and shared her experiences with the Prime Minister.
Dr Tazyeen has been actively engaged in conducting deliveries of COVID patients and providing them food and medicines. From September last year till May 16, the hospital has carried out more than 100 LCSC of the women who were COVID positive.
“It was great to talk to the Prime Minister as he appreciated the work that we have been doing at the hospital for a long time now,” Dr Tazyeen Younis told Excelsior.
<span;>Dr Tazyeen said that she interacted with the Prime Minister for at least 4 minutes during which she briefed him about the work which is being carried out at the hospital. The interaction was carried out between 5-7 pm.
“It was a nice interaction and he told me that while I am looking at you, I can see the passion in your eyes,” she said, adding that the interaction gave her a morale boost to do more in the coming days.
She said that the PM also praised the mental strength of the doctors who are involved in all this amid the pandemic.
“I have not interacted with the family for last one year now and for that one needs mental strength; the PM lauded us for that,” Dr Tazyeen told Excelsior.
<span;>She said that the Prime Minister was very impressed by the work that is being carried out at the hospital about pregnant women.
The DHSK said that the team which interacted with the PM comprised Dr. Iqbal Fateh Khan (Nodal Officer), Dr Tazyeen (Gynaecologist), Dr Riyaz Daga (Physician), Dr. Jeevan (Gynaecologist) and Dr. Umar Qadir Bacha (Anaesthesiologist).
“The PM listened to the briefing presented by Dr. Tazyeen keenly especially regarding the COVID maternity care. It is a matter of pride for us that out of so many hospitals, our facility was chosen for this meeting,” the DHSK said.
The Prime Minister during the interaction thanked the entire medical fraternity and the paramedical staff for the exemplary fight displayed by them against the extraordinary circumstances of the second wave of COVID, adding that the entire country is indebted to them.
Modi underlined that the strategy of starting a vaccination programme with front line warriors has paid rich dividends in the second wave.
The meeting was attended by Member (Health) NITI Aayog, Health Secretary, Pharmaceutical Secretary and other officers from PMO, Ministries and Departments of Central Government.