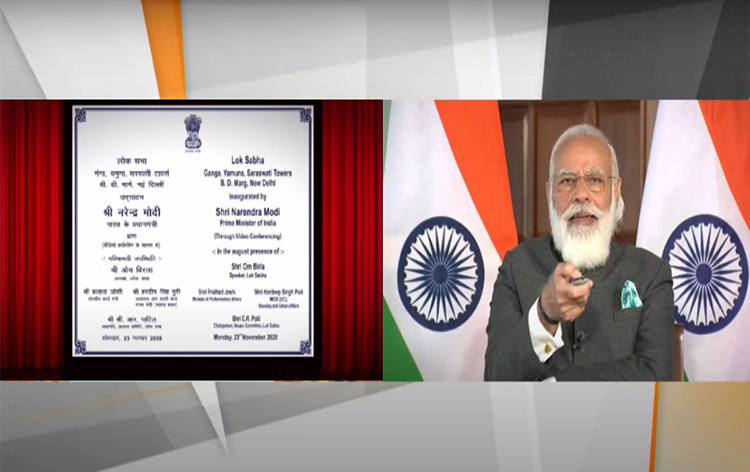 Prime Minister Narendra Modi today said construction of many buildings that were started during NDA government are being completed before the scheduled time.

Virtually inaugurating the multi-storeyed flats for Members of Parliament this morning, Mr Modi said decades of problems end not by avoiding them, but by facing them and finding solutions.

He stated that Ambedkar International Center was built by his government after a long wait of 23 years.

The Prime Minister pointed out that there were many such projects in Delhi, which were incomplete for many years.

He said the new building of the Central Information Commission was constructed during the present NDA government.

He added that the War Memorial was also built near India Gate in memory of the brave martyrs of the country during NDA government.

The Prime Minister said Parliament proceedings continued even during the pandemic, with new regulations and several precautionary measures.

He said both houses worked taking turns even on weekends.

He also said that every party helped in the smooth proceeding of Parliament in the Monsoon Session.

Mr Modi said the energy of the Lok Sabha has increased, and the reason is that the country wants to move in a new direction for change.

He highlighted that more than 300 MPs came to Parliament after getting elected for the first time.

In the first session of 17th Lok Sabha, 135 percent more work was done.

Rajya Sabha also delivered 100 percent efficiency. He said this performance is the highest in two decades.

The Prime Minister remarked that all the MPs have taken care of both the products and the process in the productivity of Parliament and have attained a new height in this direction.

He praised the Lok Sabha Speaker for his stewardship of the house in a productive and procedurally sound way.

Saying that the age of 16 to 18 years is very important for the youth, Mr Modi pointed out that they have completed the term of the 16th Lok Sabha with the 2019 election and this period has been historically significant for the progress and development of the country.

He added that the term of the 17th Lok Sabha started in 2019 and the Lok Sabha has undertaken some historic decisions.

He expressed confidence that the 18th Lok Sabha will also play a very important role in taking the country forward into the new decade.

AIR correspondent reports these multi-storeyed flats for Members of Parliament are located at Dr BD Marg in New Delhi.

Eight old bungalows, which were more than 80 years old, have been redeveloped to construct 76 flats.

The construction of these flats has been completed with savings of about 14 percent from the sanctioned cost and without time overrun despite the impact of Covid-19.

Several green building initiatives have been incorporated in the construction of these flats.