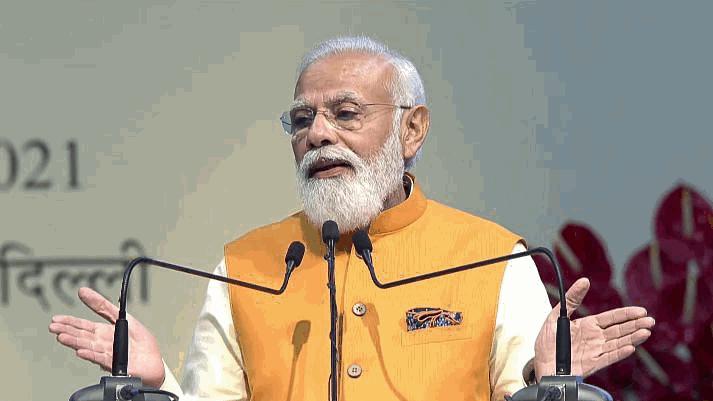 The Prime Minister Gati Shakti mega master plan launched is aimed at coordinated infrastructure schemes of various Central ministries and State governments to ensure quick completion of works and efficiency, possibly a long term need for a nation that is on booster doses of revenue injection through borrowings to push the growth.

Even as the World Bank says that the country would have 8.3 per cent growth and Finance Minister Nirmala Sitharaman saying that this would remain the trend for the next decade, the new plan is stated to check the expenses on different projects to its budgeted levels or may be less escalation in the long run. But it will still be not in a position to check the galloping inflation. Though food prices were in check for about eight months, the latest reports suggest that food and vegetable prices are shooting up in many areas.

The new mega plan would try to end various entanglements in official quarters for better implementation through coordination of 16 Central government departments, including railways, roads and highways, petroleum and gas, power, telecom, shipping, aviation and others. Bharatmala, Sagarmala, UDAN, inland waterways, and ports all are to be connected and duplication avoided for cutting costs.

The new plan is a good move to check the overall impact on prices in the long run. It may have more benefits in the future. But food and other prices may continue to soar for a number of factors that are not easy to address. The industry department data say that certain food items’ contraction has brought down the food inflation to 4.69 per cent in September. During the same time manufactured products prices soared to 11.41 per cent from 11.39 per cent in August.

Among food items prices of potato, onion and fruits are stated to have contracted the most but pulses rose 9.42 per cent and now in October, onion and fruit prices have started soaring. Food prices are not decelerating across the board. If cereal and vegetable prices are excluded from food category, the consumer price index denotes that prices of other food items have remained sticky at high levels.

In the manufactured category prices of basic metals rose to 26.71 per cent and textiles remain elevated at 26.09 per cent. Interestingly enough activities in different sectors have not yet picked up the pace needed to give the desired effect.

A major reason is the rising global fuel prices and a domestic policy of high taxation on petroleum products, a concern expressed by Reserve Bank of India. Overall inflation also pushes up wages and other costs. Global fuel prices have started firming up now with an increase in demand. India takes a double hit. As the second most populous state reaches the international market, the prices shoot up. Food grain doles are keeping the prices in check to a certain level. But as activities increase so do domestic demand. This is what a coordination committee has to look at. With crude prices hovering around $80 a barrel and likely to firm up further inflation scenario may become grim.

Whether the Gati Shakti plan using geo-mapping and real-time data in one centralised portal to ensure coordinated efforts, would keep a check on rising prices would be interesting to observe. As it is happening cost pressures could increase further. These include rising wage and transportation costs on the industry. The Bloomberg commodity index crossed 100 in the last week of September, first time since 2015, and continues to stay at that level. Prices of coal and crude oil have risen and are expected to rise further as energy consumption in the developed countries increase.

The RBI’s monetary policy committee expects inflation to start increasing from October-December quarter onwards. The WPI inflation is to rise, the MPC forecasts. Any fall in inflation may have little to do with overall growth. It is beyond the scope of any normal activities of the government. The latest Gati Shakti has a different purpose and if global situation improves then only India would have a reprieve from the mega inflation run.

Technically measured by consumer price index (CPI), the inflation is at a low. It grew at 4.35 per cent, seems something good, as overall it has come down by 195 basis points. Inflation figure is a bit complicated and not answered by figures. The headline numbers do not speak out the reality and the issue remains complicated.

The inflation also impacts purchasing power. It means the consumers are yet not flocking to the market. This means the sales of goods are not increasing. Many units are unable to transfer the additional costs on fuel to the consumers. Even the truckers face this problem. They cannot let their fleet remain idle. So even at lower prices they agree to transport goods.

Another aspect is a kind of stagnation in income levels and in some cases even rising income is not seeing the end of poverty. There is concern about inequality-driven inflation. This helps large companies gaining pricing power, notes a HSBC Securities and Capital Markets India paper. It says that cost adjustments around the world are leading to unpredictable inflationary pressures.

So there are expectations from government announcements. While the Gati Shakti has raised higher hopes of completing projects within the budgetary expenses, it also needs practical approach to address the issue. The Gati Shakti is a larger concept with integrated and coordinated growth plan. To give pace to it, another master plan to check inflation is needed.

The administered prices of petroleum products along with the higher cost on road travel also have to be seen from the aspect of coordination. Coordinated pricing is key to the success of the Prime Minister’s new master plan. It would take wings once the monitoring group talks and listens to the coordinated moves needed long back on infrastructure projects.

Prime Minister Narendra Modi has concept and vision. He has to set up another committee for coordinating the issues of fuel prices for the best gains from the Gati Shakti. Inflation is complicated. It has to be tamed through how fuel, coal and other energy related prices could be kept low. It could be through adjustment in taxes, non-impounding of old vehicles, cheaper travel to make fuel affordable at around Rs 50 to 60 a litre. At lower fuel prices, there would be more activities, more revenue generation and the aim of the NDA government to have an overall development could be achieved.