Home Newsfeed Please carry on with others: Pranab Mukherjee’s advice to PM Modi 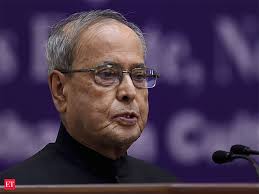 At a time when the opposition is levelling allegations against the BJP led Central government of being brutally authoritative, former President Pranab Mukherjee too has a word of advice for Prime Minister Narendra Modi — Please carry on with others! Delivering the second Atal Bihari Memorial lecture organised by India Foundation in the national capital on Monday, Congress leader Mukherjee said that parliamentary democracy calls for taking everyone including opposition along.
“As a former parliamentarian with 48 years of experience, I have a piece of advice — numerical majority gives you the right to give a stable government, but please carry on with others. Lack of popular majority forbids you from a majoritarian government, that is the message and essence of our parliamentary democracy,” stated Mukherjee.

Mukherjee’s statement comes at a time when the Opposition is accusing the government of ‘misusing’ the people’s mandate it has got in the 17th Lok Sabha elections.
Mukherjee also took on the Opposition and the role of its members in the House.
Expressing concerns over disruption in the House, Mukherjee said: “Disruption of the House is nothing but gagging of the members of the House. Disruption must be prevented and dealt firmly.”
He recalled the time when he suspended 11 MPs for taking money to put questions in the House. “Identify perpetual disruptors and it will be possible to handle them,” stated the former President.