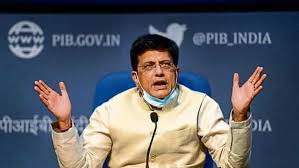 After meeting lawmakers from Punjab regarding Railway services amid the ongoing anti-farm laws protest, Union Minister Piyush Goyal assured them that they are ready to resume train services if Captain Amarinder Singh-led government assured safety and security of railway property and personnel and clears the tracks.

Goyal met various Members of Parliament (MPs) from Punjab on November 4.
Taking to Twitter on Thursday, Piyush Goyal said, “Met with MPs from Punjab regarding Railway services in the State. Railways are keen to start services for the benefit of farmers, industry, MSMEs, general public and passenger convenience.”
“Requested state government to clear entire Railway network from blockages so that we can run all trains, to and through Punjab, without interruption and safely,” the Minister said in a subsequent tweet.

The Railways Ministry on Thursday said that it has continued to lose revenue as Freight operations remain forcibly suspended due to tracks blockages in Punjab. “Till date, more than 2,225 freight rakes (coupled passenger coaches) could not be operated upon carrying vital commodities,” it said.
Punjab Chief Minister launched a ‘dharna’ at Jantar Mantar in Delhi on November 4 over the issue of suspending the goods railways services in Punjab. Farmers of the state have been observing ‘rail-roko’ protest against the new farm laws, passed by the central government in September. Chief Minister has said that the central government is behaving like a ‘step-mother’

Will be able to provide clean drinking water round the clock in Delhi by 2025: Satyendar Jain
Pakistan continues to use terrorism as state policy, India has exposed its regressive policies: Rajnath Singh
Comment