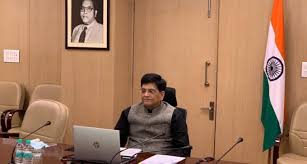 Commerce and Industry Minister Piyush Goyal has urged SCO countries to leverage their economic strength and explore partnerships that enhance trade and investment in the region. He was speaking yesterday at the 19th Meeting of the Shanghai Cooperation Organization (SCO) Ministers responsible for Foreign Economy and Foreign Trade Activities through video conferencing. He said that cooperation should be continued to enhance intra-SCO trade and investment which would be critical in ensuring the speedy recovery from the aftermath of the COVID-19 pandemic.

According to an official release, the Minister said that every nation’s world view is shaped by its civilization and philosophical tradition and India’s ancient wisdom sees the whole world as one family -Vasudhaiva Kutumbakam. Minister of State for Commerce and Industry Hardeep Singh Puri also spoke on the occasion.

The virtual meeting was attended by the Secretary-General of SCO and Ministers from Kyrgyz Republic, Kazakhstan, Pakistan, Russia, Tajikistan and Uzbekistan.

Join The Dispatch Whatsapp Group to stay updated
The Dispatch is present across a number of social media platforms. Subscribe to our YouTube channel for exciting videos; join us on Facebook, Intagram and Twitter for quick updates and discussions. We are also available on the Telegram. Follow us on Pinterest for thousands of pictures and graphics. We care to respond to text messages on WhatsApp at 8082480136 [No calls accepted]. To contribute an article or pitch a story idea, write to us at m[email protected] |Click to know more about The Dispatch, our standards and policies