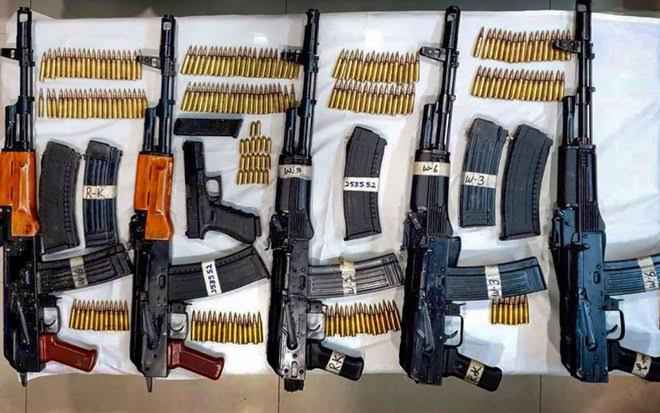 Jammu: Security forces recovered arms, ammunition and explosive materials from a militant hideout in Dabbi village along the Line of Control (LoC) in Jammu and Kashmir’s Poonch district on Wednesday, officials said.
The recoveries were made based on the disclosure of militant associates arrested on Sunday.
The Jammu and Kashmir Police and the Army have recovered two pistols, 70 pistol rounds and two grenades kept in bushes along the LoC in Dabbi village of Balakote sector in Mendhar sub-division, Senior Superintendent of Police (SSP), Poonch, Ramesh Kumar Angral said.
The arms and ammunition have been recovered on the disclosure of three Pakistan-linked militant associates arrested on Sunday, the SSP said.
He said during questioning of arrested militant associate Yaseen Khan, some vital clues on his confession were developed after which a team of police headed by Sub-Divisional Police Officer (SDPO) Mendhar, Zaheer Jafri, along with the Army launched an operation in Dabbi and recovered a consignment of arms and ammunition kept in a polythene bag in the bushes.
“Two pistols, 70 bullets and two grenades have been recovered so far and more searches are going on,” Angral added.
He said militant outfits were trying to target religious places in Poonch but their nefarious designs have been foiled by the Army and police.