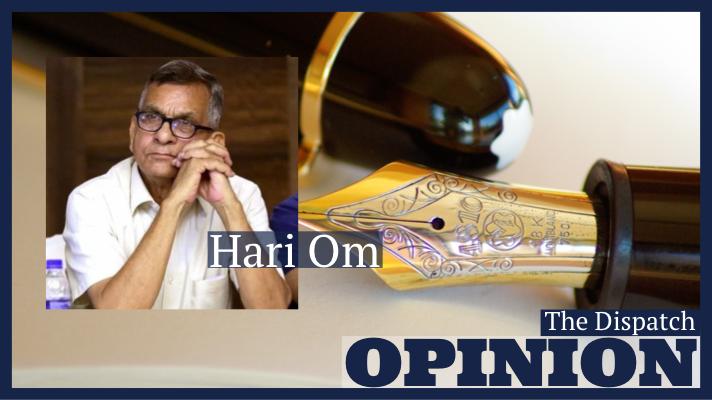 Hari Om
Add Comment
The statehood or UT status to Jammu province alone can regenerate the socio-economic and political life of its people. Those who are demanding delimitation based on new census figures are living in a world of the past. It would not help them for reasons not really difficult to fathom. They would do justice to the people of Jammu province if they persuade Narendra Modi Government to treat Jammu province like it treated the people of Ladakh. This is the only panacea available

Justice Ranjana Desai-headed delimitation commission is on the job. If all goes well, the three-member commission, which was constituted on March 6, 2020, may submit its report any time after December 2021.
Determined as they are to perpetuate Kashmir’s hegemony over the polity and economy of the UT of J&K, the National Conference (NC), which earlier had announced boycott of the commission, has almost taken a complete U-turn. If sources close to NC owners are to be believed, then the possibility of its three MPs of not even two lakh votes, who are associate members of the commission, participating in future meetings of the commission just can’t be overruled. In fact, the NC has given a clear hint that it could participate in the meetings of the commission and will fight for over 50 per cent out of a total of 90 seats, so that Kashmir could continue to rule or misrule Jammu province as it did after 1948.

The possibility of NC taking part in the meetings of the commission is one part of the two-part story. The other part of the story is a conspiracy being hatched in Kashmir by elements hostile to Jammu province. The case in point is the insistence that delimitation of the assembly constituencies must be based only on population. Another case in point is the sinister narrative that presents Kashmir as a homogeneous unit and Jammu province as socially, politically and geographically heterogeneous region overlooking the unambiguous Asia Hotel statement of former J&K Chief Minister, Farooq Abdullah that say ‘whatever you want to say but fact is that Jammu, like Kashmir, is a heterogeneous region’.

Take, for example, what former Finance Minister Haseeb Drabu has said, ‘In all the legislative assemblies of the erstwhile state of J&K, there has been no imbalance, regional or otherwise, in the distribution of assembly seats. More specifically, contrary to perception, Jammu has not been discriminated against in representation. In last legislative assembly, for instance, the Kashmir Valley, which had 55 per cent of the population, had 53 per cent of the seats. Jammu, with a share of 43 per cent in the population, got 42.5 per cent of the seats in the legislative assembly. The area of the Jammu division is now 62 per cent while that of Kashmir is 38 per cent. Hence, clamour from Jammu-centric political parties and civil society for using area as a criterion for delimitation’.

‘Having already decided on the number of electors (based on the 2011 census) as well as the number (90) of elected, the only part of delimitation that has been left to the Commission is the electoral cartography – the redrawing of boundaries and enclosing people within the constituency. The Commission’s approach to redrawing of constituencies in J&K should not, and indeed cannot, be the seat distribution between the Jammu division and the Kashmir division. What should be the end result can’t be the starting point. Both are administrative divisions and not electoral constituencies. This binary of Jammu versus Kashmir, which has now become a bipolarity, may be relevant for developmental decisions but not for representational purposes’.

‘Following the principle of ‘communities of interest’ used universally in redrawing of constituencies, the Commission should follow a ground-up approach. Indeed, Section 60(2) (b) of J&K Reorganisation Act, 2019, specifies that ‘all constituencies shall, as far as practicable, be geographically compact areas, and in delimiting them, regard shall be had to physical features, existing boundaries of administrative units’. The operative part is ‘physical features’, which include natural boundaries created by dominant topographical features such as mountain ranges, or rivers. On this stipulated basis of topography, today’s J&K comprises four distinct regions – Jhelum Valley (South Kashmir, Central Kashmir and North Kashmir), Chenab Valley (Kishtwar, Doda, Ramban & Reasi), Pir Panchal (Rajouri and Poonch), and Tawi basin or plains (Jammu, Kathua and Udhampur). The assembly constituencies in and across these four regions need to be distributed on basis of share of population’.
Drabu terms Kashmir Jhelum Valley. He is wrong on a number of counts. One, Jhelum is a misnomer. The original name, according to Rigveda is Vitasta. Two, the length of Kashmir Valley is 132 Km and width just 32 Km and its part, which is inhabited predominantly by ethnic Kashmiris with the original inhabitants languishing as refugees in Jammu and other parts of the country. The rest of Kashmir is hilly and mountainous like the whole of Jammu province, barring four to five tehsils. The bulk of population which inhabits the mountainous areas of Kashmir is non-Kashmiri (Pathwaris, Gujjars, Bakerwals etc).
Haseeb Drabu and ilk would do well to re-study geography of Kashmir and its demographics and stop terming Reasi, Doda, Kishtwar and Ramban as Chenab Valley and Poonch-Rajouri area Pir Panjal otherwise they would become objects of ridicule. Even a layman knows that all these districts of Jammu province are located in what is called mighty Pir Panjal Mountain Ranges – the natural boundary between Kashmir and Jammu and that the whole approach of Drabu and others of his ilk is communal, patently subjective and fundamentally flawed.

Similarly, their view that Jammu province was overrepresented in all the assemblies as compared with Kashmir is as illogical as it is outrageous and ridiculous. Who in the UT doesn’t know that the population of Jammu province is more than Kashmir and that the figures of all the censuses held in and after 1961 were fudged to ensure Kashmiri domination over Jammu province? It’s also not a secret that the number of voters in Jammu province was more as compared with Kashmir till 2002. Hold a fair census or decide the number of voters in the UT on the basis of the Aadhaar Cards issued so far to the people of both the regions and you will know that Kashmir is inferior to Jammu province both in terms of population and voters.

It needs to be underlined that Jammu province will get at least 50 out of 90 seats on the basis of population alone and at least 7 to 8 seats more if its land area, nature of its terrain and accessibility also are taken into consideration, which is mandatory but which no commission ever took into consideration to appease Kashmir and jeopardize the legitimate interests of the people of Jammu province, Hindus, Muslims and Sikhs included. The Kashmiri leaders of all shades of opinion know all this and that’s the reason they had been opposing the very idea of de novo delimitation of assembly constituencies and describing it as a conspiracy against Kashmir and Kashmiri Muslims.

However, to say all this is not to suggest that even a fair delimitation will help Jammu province attain the political status it deserves. It will not. There will always be a conflict like the conflicts we witnessed after 1846, when Kashmir got merged with the Dogra Kingdom. The statehood or UT status to Jammu province alone can regenerate the socio-economic and political life of its people. Those who are demanding delimitation based on new census figures are living in a world of the past. It would not help them for reasons not really difficult to fathom. They would do justice to the people of Jammu province if they persuade Narendra Modi Government to treat Jammu province like it treated the people of Ladakh. This is the only panacea available.

Author, a noted historian, has been a key contributor to the Jammu-centric debate for decades. The views expressed here are his personal

Join The Dispatch Whatsapp Group to stay updated
The Dispatch is present across a number of social media platforms. Subscribe to our YouTube channel for exciting videos; join us on Facebook, Intagram and Twitter for quick updates and discussions. We are also available on the Telegram. Follow us on Pinterest for thousands of pictures and graphics. We care to respond to text messages on WhatsApp at 8082480136 [No calls accepted]. To contribute an article or pitch a story idea, write to us at [email protected] |Click to know more about The Dispatch, our standards and policies
TagsJammu Jammu after 370 Prof Hari Om

Message To The World