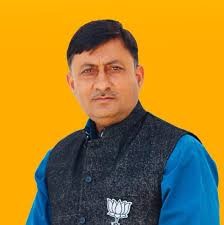 BANDIPORA: The Bharatiya Janata Party J&K on Thursday that the People’s Democratic Party (PDP) is trying to become a new separatist party in the valley.

After paying tributes to BJP leader Waseem Bari, his brother and father on their first death anniversary, who was killed in a militant attack this last year at Bandipora, Gupta while speaking to reporters Vibodh Gupta said that PDP was trying to become the separatist party in Kashmir, as Mehbooba Mufti does not leave any way behind to become the next Geelani of Kashmir.

“PDP is disappearing with each passing day because it is based on lies and they have always lied to the people,” he said, adding that BJP workers are being deliberately attacked in Kashmir as they always thwarted the plans of separatist leaders, and which is why they want their workers and leaders have maximum security cover.

He also said that the BJP party have supported the family of Waseem Bari since when he was killed along with his father and younger brother.

Meanwhile, BJP spokesman Altaf Thakur, who also visited Bandipora today to pay homage to Waseem Bari, his father and brother, said that they always feel the absence of brave leaders like Waseem Bari.

“Our leaders and workers have always stood for peace and progress in Kashmir, but the separatists and Pakistan are worried about the same,” he said, adding that the strategy of the BJP party for Kashmir will be constant.

Notably, on this day last year Waseem Bari, who was district president of BJP for Bandipora, was killed along with his father and younger brother in a militant attack outside their residence his residence in Muslim Abad locality of Bandipora—(KNO)

Raj Bhawan, Civil Secretariat Jammu declared as ‘No Fly Zones’
“The Hottest Summer in Years”: An unconventional love story is at the heart of this novel set in 1960’s India
Comment