In the election meeting held in Kupwara, PC’s Irfan Panditpuri was unanimously elected as chairman of the district development council while four members from National Conference remained absent from proceedings but they failed to ensure abstentions from three other members from Apni Party, Awami Ittehad Party and an independent candidate.

“The party was hopeful that three other members would remain absent and force authorities to adjourn election due to lack of quorum but they turned up ,” sources familiar with the party’s strategy told news agency.

The post of vice-chairperson was also bagged by PC—backed Independent candidate, Hajji Farooq.

During the DDC election held in November—December, PC emerged as the single largest party by winning five seats, followed by National Conference with four seats.

Two seats went into the kitty of independent candidates while one seat each was bagged by Apni Party and Awami Ittehad Party of Er. Rashid. 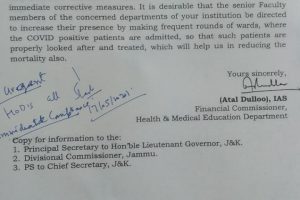