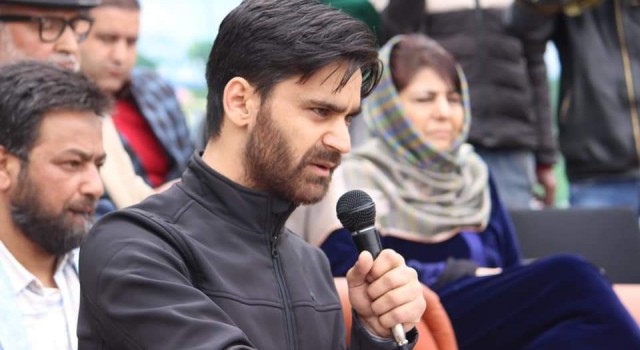 Srinagar: Waheed-ur-Rehman Parra, senior PDP leader and close aide of former chief minister Mehbooba Mufti, has approached the Jammu and Kashmir High Court for quashing of an FIR against him by the Jammu and Kashmir Police, citing violation of fundamental rights guaranteed under the Constitution and “sameness” of the charges also being probed by the NIA.

In the petition, Parra’s counsel Shariq Reyaz submitted that his client was investigated for the same offences by the National Investigation Agency (NIA) as well as the Counter Intelligence (Kashmir) wing of Jammu and Kashmir Police separately, which is in violation of laid down norms under the Code of Criminal Procedure.

Justice Vinod Chatterji Koul, after hearing arguments on the petition challenging the framing of charges in the police case by a designated court last month, had issued notice to the Counter Intelligence (Kashmir), or the CIK, last week for filing its response within a month.

Reyaz drew a table in his petition of the two FIRs and two charge sheets filed by the NIA and the CIK to draw similarities in the offences being investigated by the two probe agencies separately.

In his petition, the counsel termed the framing of charges by the designated court in Srinagar on the charge sheet filed by the CIK a “mechanical exercise” and referred to judgments of the Supreme Court “wherein a word of caution has been administered to the trial courts to carefully examine the evidence and after analysing the same frame charge under the rigorous scheme of UAPA.”

The counsel also mentioned that the FIR by the CIK is “clearly tainted with the vice of malice in law, having been registered only to attain a collateral purpose of detaining the petitioner (Parra) illegally and unlawfully being in blatant abuse of police power, violating with impunity the constitutional guarantees guaranteed under Article 21 of the Constitution of India.”

Article 21 says that no person shall be deprived of his life or personal liberty except according to a procedure established by law.

Reyaz submitted before the high court that the “impugned investigation/ prosecution in the present case, if allowed to continue, would not only offend against the very mandate of constitutional guarantee guaranteed to the petitioner under Articles 14 and 21 of the Constitution of India but is also sure to result into the grave miscarriage of justice.”

“Therefore, to prevent the miscarriage of justice from being perpetuated the impugned FIR…as well as the impugned investigation initiated and commenced against the petitioner in pursuance thereto, is liable to be quashed.”

Article 14 says that the State shall not deny to any person equality before the law or the equal protection of the laws within the territory of India.

Reyaz also challenged the sanction for prosecution, a mandatory requirement under the UAPA, given by the Home Secretary of Jammu and Kashmir, saying under the Reorganisation of Jammu and Kashmir Act of 2018, law and order is a subject of the Centre and the officer concerned is not competent to issue any such order.

“Admittedly the sanction for prosecution accorded in the present case is not by the Central Government acting through the Administrator but by the Government of Jammu and Kashmir through its Principal Secretary (Home)…and thus void ab-initio and non-est in law, liable to be quashed/set at naught under the appropriate orders”, the petition said.

The designated court in July last had framed terror charges against Parra on a police charge sheet claiming that he was an asset for Pakistan-based terror groups and that his 13-year journey as a journalist and politician from 2007 was a “saga of subterfuge, deceit and double-dealing”.

The eight-page order stated that “prima facie there is sufficient evidence against the accused for alleged commission of offences under the Unlawful Activities (Prevention) Act and the Indian Penal Code.”

The special NIA judge charged him with being a member of a terror group, raising funds for them as well as aiding an outfit. He was also charged under sections related to waging war against the country, spreading disaffection against the government and criminal conspiracy.