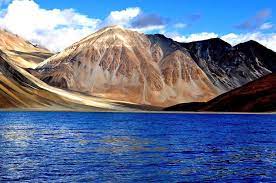 SRINAGAR: A parliamentary panel has recommended to the Government of India to declare the official language of the Union Territory of Ladakh within a stipulated time frame.

In its report, the department-related parliamentary standing committee on Ministry of Home Affairs (MHA) has recommended to the Centre to declare the official language of UT of Ladakh, which was part of the erstwhile state of Jammu & Kashmir before the BJP-led central government read down Article 370 and reorganized the State into two UTs.

“The committee notes that the official language of the UT has not been declared even after the passage of two years since the creation of two UTs. It recommends that the Government of India may declare the official language of the UT of Ladakh within a time frame. The committee also recommends the government to notify the third language under new education policy for the UT of Ladakh,” reads the report.

In 2020, the parliament cleared a bill for the adoption of Hindi, Kashmiri, Dogri, Urdu and English as official languages of the union territory of Jammu and Kashmir—(KNO)

KPs have died, which is regrettable; but Muslims, Sikhs too have been killed: Omar Abdullah
Youth with family history of militancy; stone pelting; influence of online propaganda, picking up arms: IGP Kashmir
Comment