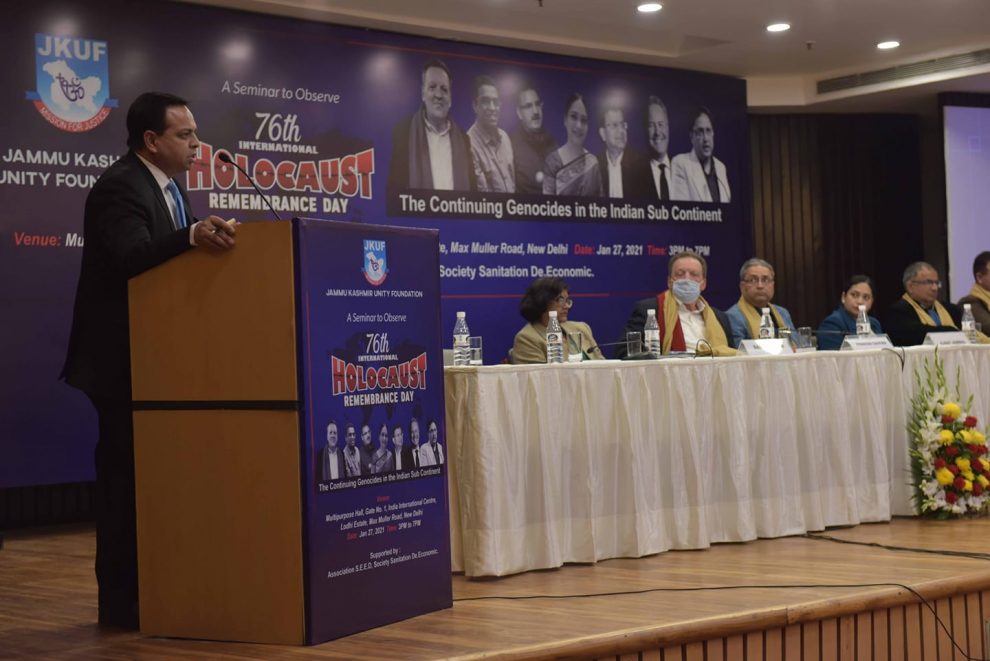 Jammu and Kashmir Unity Foundation today demanded a trial of Pakistan in the International Court of Justice and announced its intent to form an International Alliance for Prevention of Genocides.
The panelists at the International Seminar on the Holocaust Remembrance Day held at India International Centre, New Delhi today termed Pakistan as a Genocidal Nation that has been perpetrating Genocide in the whole of Indian Subcontinent including India, Bangladesh, Pakistan, Balochistan, Hazaras, Afghanistan etc. They said Pakistan is the Mother of Terrorism and in each and every terrorist act across the world Pakistan has a direct role.
The panelists included Bob Blackman, MP, United Kingdom Parliament (Online), Francois Gautier, Journalist & Author, Dr. Nuzhat Choudhury, Bangladesh, Dr. Ajay Chrungoo, Chairman Panun Kashmir, Bashir Assad, writer of K Files, Sandhya Jain, Author Balochistan in the Crosshairs and Ajaat Jamwal, president Jammu Kashmir Unity Foundation.
Speaking on the Occasion through Web Mr. Bob Blackman, MP UK Parliament regretted his inability to come to the seminar. In his message, he said that the UK officially observes International Holocaust day and it was imperative that the victims of genocides and right-thinking people come together to fight for the prevention of genocide. He that the people of Jammu and Kashmir have been the victims of Pakistan-sponsored terrorism and the revocation of Article 370 has restored the rights of the deprived sections. Mr. Bob Blackman hailed Govt of India for the historic step.
Dr. Nuzhat Choudhaury from Bangladesh said that her country has been a victim of Genocide at the hands of the Islamic Republic of Pakistan and the Pakistani Army killed Bangladeshis in 1971 without differentiating between Hindus or Muslims. She said that the Pakistani Army killed Bangla nationals and it was their avowed objective to kill Bangladeshi men and women.
Nuzhat Choudhury said that her organization is working for bringing the perpetrators of inflicting Genocide on Bangladesh nationals and would not rest till Generals of Pakistani army are tried for Pakistan. She supported the idea of forming an International Alliance for the prevention of Genocides.
Dr. Ajay Chrungoo narrated the tales of horror faced by Kashmiri Hindus at the hands of Pakistan sponsored terrorist. He said that denial of Genocide replicates genocide. He insisted upon the Govt of India to enact a Bill for the prevention of genocides.
Francois Gautier spoke on Genocide of Kashmiri Hindus, Bangladesh and Pakistan.
Sandhya Jain narrated the tales of exploitation of Balochistan.
Bashir Assad narrated the tales of both sides of players in Jammu and Kashmir. He said that disruptions need to be tackled with firm hands.
Nitin A Gokhale made a powerful presentation on #pakistani role in Bangladesh Genocide.
Ajaat Jamwal President, Jammu Kashmir Unity Foundation speaking on the occasion said that International Holocaust Rememberance day is observed in the memory of 6 Million Jews and Armenians killed. But United Nation has not recognized the genocides in India, Bangladesh, Pakistan and J&K perpetuated by Genocidal Nation Pakistan. He said that soon JK Unity Foundation will reach out to like minded people/nations to form the International Alliance for Prevention of Genocides.
Dr. Gopal Parthasarthi Sharma, General Secretary JK Unity Foundation welcomed the guest and conducted the programme.
Prominent among others present were Elena Bistiu, Charge D Affairs, Embassy of Romania, Dr. Vijay Sagar Dheman, Col. Rakesh Aima, Sushil Pandit, panelist, SP Slathia, CS, Dr. Monika Langeh, Dr. Pawan Dutta, Vikram Singh Jasrotia, Advocate, Gotam Singh, Amit Gupta