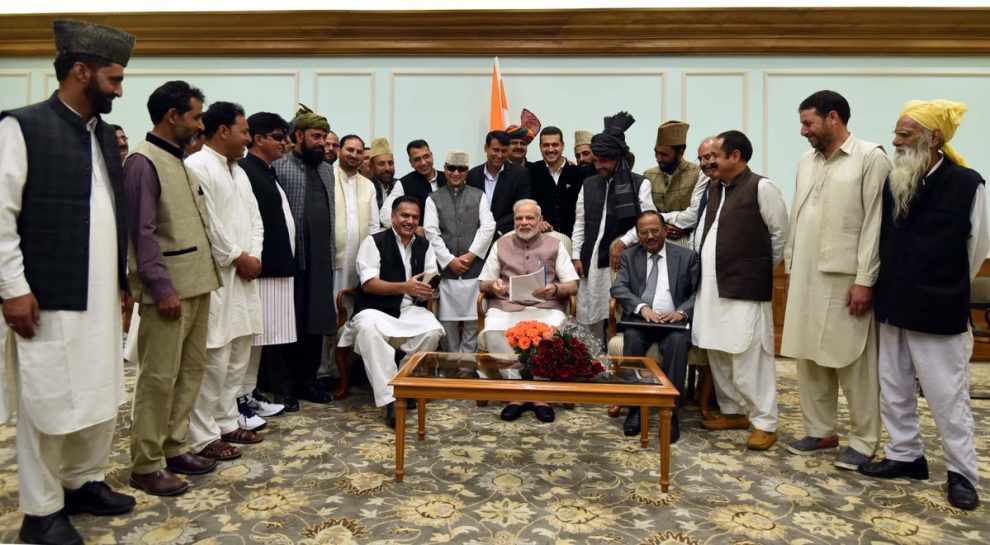 In 1947 the Maharaja regime ended and all powers were transferred to Sheikh Mohammad Abdullah as Chief Executive of Jammu and Kashmir. Sheikh  Abdullah made more amendments to this act expanding the roles of these institutions.

This act was again amended in 1951 and 1958. However, the institution was kept confined to village level affairs only.  The Panchayat means some members and a sarpanch and even some members of the Panchayat were nominated by the government only. This practice continued till the late 80s  and at last, in 1989 government of Jammu and Kashmir came up with new legislation and passed Jammu and Kashmir Panchayati raj act 1989.

This Act provided the three-tier Panchayati Raj system in the state, viz Halqa Panchayat, Block development council (Block Samiti ) and  District planning and development board or Zila Parishad.  The most important provision in this act was Panchayati Adalat (a judicial role of Panchayats) with powers of settling all non-criminal local disputes.

Under this act the first Panchayat election was held in Jammu and Kashmir in 2000, however, most of the seats remained vacant at that time because of the pressure of militants and separatists particularly in the valley districts. after the completion of the term in 2005, no elections were held in the state in the flowing six years till 2011.

There was no constitutional binding for them to conduct fresh elections after the expiry of the first term of the Panchayats. And this practice was done only up the level of first tier which is called Halqa Panchayat comprising a Sarpanch and some Panches. The institution was not let to go up to third-tier despite the provision being in place in Jammu and Kashmir Panchayati Raj act 1989.  The main reason behind this was that the local state government never wanted to decentralize the power.

In fact, the real struggle for a three-tier PRI system in Jammu and Kashmir started in the year 2012 with a group of Sarpanches led by  Shafiq Mir a Sarpanch from district Poonch of Jammu and Kashmir.

He was the first person who organized various Panchayat associations and organizations under one umbrella called All J and K Panchayat Conference. And since then there was no looking back for the leaders of this organization. This was the organization led by Mir which stood like a rock in all the odd times when militants started targeting the sarpanches and killing them to resign from the Panchayats in 2012.

On seeing the gravity of the situation, on September 27, 2012  then all-powerful Congress leader Rahul Gandhi invited this group of Srpanches led by Shafiq Mir to Delhi and held two days long deliberations with them in presence of then MoS Home Mr Jitendra Singh to find out the ways how to build confidence among the Panchayat leaders of Kashmir who were on a resigning spree at that time. Finally, it was decided that Mr Rahul Gandhi himself will visit Kashmir and meet the Panchayat members.

On 4th October 2012, Rahul Gandhi reached Srinagar and met with the Panchayat leaders at SKICC Srinagar to build their confidence and assured them all of the help in the empowerment of Panchayats. Though Rahul Gandhi wanted to extend the 73rd amendment of the Indian constitution to Jammu and Kashmir but his government partner in JK National Conference was reluctant to implement this constitutional amendment on the pretext of article 370 .

In the year 2014 Mufti Sayed’s PDP came into power in Jammu and Kashmir, in the first stroke, this government dissolved all Panchayat prematurely two years advance of its term completion.  However, by that time All J and K Panchayat Conference had turned a very strong voice and it started its struggle again finally about 40 members delegation of this organization meets with Prime Minister in Delhi on November 5th 2016 and demanded the fresh Panchayat elections and implementation of 73rd amendment of Indian constitution regarding Panchayati Raj in Jammu and Kashmir. This was the time when the whole valley was shut after the killing of a prominent militant commander Burhan Wani in July that year.

This was very bold decision of the organization at that time because it was a step seen as against the winds.  This proved a Significant meeting with PM Modi and he gave his full support to this organization and assured them to hold fresh elections in the state of Jammu and Kashmir through the local PDP government in Jammu and Kashmir was not ready to conduct the elections fearing bloodshed. Finally, in 2018 after the collapse of the PDP government Panchayat elections were announced by PM Modi but all the political parties of Jammu and Kashmir Particularly NC and PDP openly boycotted these elections and separatists and militants had already given boycotted.

At that time Panchayat Conference was the only organization led by Mir which had stood in the ground and announced to contest these elections. the elections were held and by and large 74% polling was registered in Jammu and Kashmir despite boycott calls given by all major political parties and separatists.

Following this, in 2019 first time second ties elections for block development councils were held and in the year 2020 third-tier elections were also held and a complete Panchayati Raj system came into being in Jammu and Kashmir. During all these years more than two dozen Sarpanches have been killed by the militants in Jammu and Kashmir.

The author is former journalist who did pathbreaking stories, Mir is a pioneering activist of the Panchayati Raj system. Leader of J&K Panchayat Conference, he is Chairman of a Block Development Council.