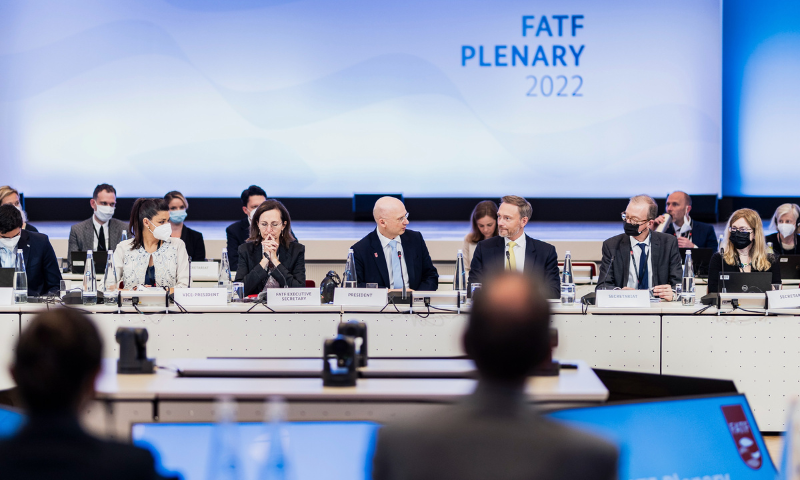 The Financial Action Task Force (FATF) once again will decide whether to take Pakistan off the ‘grey’ list at the end of its ongoing four-day plenary session in Berlin starting on 14 June. Pakistan was placed under the FATF “grey list” also known as the “increased monitoring list” in June 2018 to check its progress on measures against money laundering and terrorism financing. Since then, Pakistan has taken several measures to comply with and implement the watchdog’s action plan.

Pakistan’s chequered history with the FATF
Pakistan first entered the FATF’s list in 2008, then removed and brought back between 2012 to 2015. Later in 2018, Pakistan was bought back on the grey list and remains on the list since then. Pakistan has two concurrent action plans with a total of 34 action points fully or largely addressed to curb money laundering and terror financing. One is a 27 action item in its 2018 action plan of the FATF combating anti-money laundering/combating the financing of terrorism (AML/CFT) and the other is a 2021 action plan on money laundering from the watchdog’s Asia Pacific Group on Money Laundering (APG).

During the previous plenary session in March 2022, the FATF retained Pakistan on its grey list but appreciated the country’s robust progress on its global commitments to fight financial crimes as it completed 26 of the 27 action items in its 2018 action plan and the seven action items of the 2021 action plan of APG ahead of the deadlines.

In October 2021, the FATF had again acknowledged Pakistan’s progress on the 27-point action plan on completion of 26 items, however, retained the country on the grey list to exhibit terror financing investigations against and prosecutions of top cadres of UN-designated terror groups. Overall, the FATF said that Pakistan had addressed or largely addressed 30 of the items of 34 items of the two concurrent action plans.

In June 2021, the FATF retained Pakistan on its grey list but stated that the country had made significant progress as it had largely addressed 26 out of 27 items on the action plan it first committed to the 2018 action plan. However, the FATF added that the item on financial terrorism needed to be addressed which concerned the “investigation and prosecution of senior leaders and commanders of UN-designated terror groups.”

In February 2021, the FATF retained Pakistan on its grey list as there remained “serious deficiencies” in mechanisms to plug terrorism financing. The FATF stated that three out of the 27-point action plan needed to be fully addressed and that Pakistan must improve its investigations and prosecutions of all groups and entities financing terrorists and their associates and show [that] penalties by courts are effective.

In October 2020, Pakistan had complied with 21 out of 27 points of action. As the FATF retained Pakistan on its grey list, it stated that four areas need to be looked into to address its strategic deficiencies. These included demonstrating that law enforcement agencies (LEAs) are identifying and investigating the widest range of terror financing activity; demonstrating that terror financing prosecutions result in effective, proportionate and dissuasive sanctions; demonstrating effective implementation of targeted financial sanctions against all 1267 and 1373 designated terrorists and those acting for or on their behalf and demonstrating enforcement against violation of terror financing sanctions, including concerning NPOs.

In February 2020, Pakistan had “largely addressed” 14 out of 27 action items. The FATF strongly urged Pakistan to “swiftly complete” its full action plan, warning that action would be taken if the country did not take significant and sustainable progress especially in prosecuting and penalizing TF (terror financing).

In October 2019, Pakistan had only largely addressed five of 27 action items. The FATF had expressed serious concerns about the overall lack of progress by Pakistan to address its TF (risks, including remaining deficiencies in demonstrating a sufficient understanding of Pakistan`s transnational TF risks as well as the country`s failure to complete its action plan in line with the agreed timelines and the light of TF risks originating from the jurisdiction.

In February 2019, the FATF stated that Pakistan has taken steps toward improving its AML/CFT regime, including by operationalising the integrated database for its currency declaration regime. Pakistan has revised its TF risk assessment; however, it does not demonstrate a proper understanding of the TF risks posed by several terrorist groups.

In October 2018, Pakistan made a high-level political commitment to work with the FATF and APG to strengthen its AML/CFT regime and address its strategic counter-terrorist financing-related deficiencies.

Pakistan’s FATF problem
Since being put back on the grey list in 2018, Pakistan has taken several measures to implement and comply with the FATF’s action plans. However, their efforts have not yielded the results Pakistan wishes for the following reason.

First, the ineffectiveness of the legislations implemented. Pakistan has successfully managed to pass legislations as advised by the FATF, however, although the technical compliance may have significantly improved, its effectiveness in implementing these laws is still ranked as poor by the FATF. Despite the numerous amendments to the Anti-Terrorism Act, 1997 and changes in the Protection of Pakistan Act (PPA), 2014, and Fair Trial Act, 2013 (FTA) and the establishment of military courts for speedy trials of terrorism cases, none of these legal measures have addressed the high acquittal rate in terrorism-related cases. Thus, the lacuna in the passing and implementation of several AML/CFT remains.

Second, the threat of terrorism. According to the Basel Anti-Money Laundering Index for 2021 which measures the risk of money laundering and terrorist financing (ML / TF) in jurisdictions around the world, Pakistan was ranked 28 out of 110 countries have a score of six for AML. Thus, proving to be a high-risk country. Similarly, according to the Global Terrorism Index 2022 by Institute for Economics & Peace, Pakistan remained one of the ten most affected countries by terrorism in 2021. The report claimed that terrorism deaths in Pakistan rose slightly to 275, a five per cent increase from 263 deaths in 2020. The GTI moved Pakistan from the eighth most impacted to the tenth country affected by terrorism. This highlights the fact that terrorism continues to thrive in the region despite the government trying to implement the FATF’s action plans to curb terrorist financing and money laundering.

Being on the grey list has come with a cost, while Pakistan may not fall on the watchdog’s black list the country must ensure it is removed from the grey list given that it signals global financial and banking system about increased risks in transactions with the country. However, given the significant progress made by Pakistan, it is only a matter of time before when the grey tag will come off.

The Dispatch is present across a number of social media platforms. Subscribe to our YouTube channel for exciting videos; join us on Facebook, Intagram and Twitter for quick updates and discussions. We are also available on the Telegram. Follow us on Pinterest for thousands of pictures and graphics. We care to respond to text messages on WhatsApp at 8082480136 [No calls accepted]. To contribute an article or pitch a story idea, write to us at [email protected] |Click to know more about The Dispatch, our standards and policies
TagsFATF The Dispatch