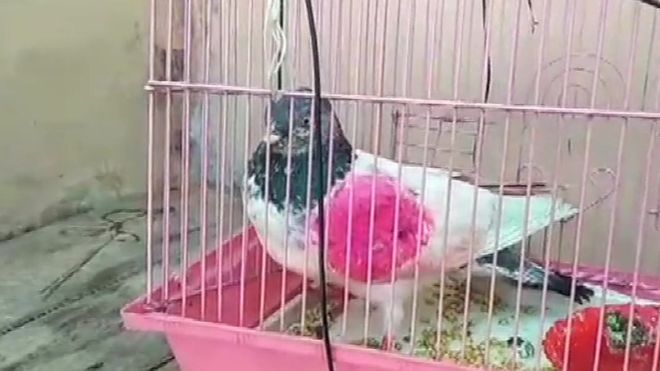 Jammu: Jammu and Kashmir police have set free alleged Pakistani ‘spy’ pigeon, who was captured along the International Border (IB) in Kathua district on May 25, after finding “nothing suspicious” on him.
The pigeon with a “coded message” in its ring was captured by residents of Manyari village in Hiranagar sector of Kathua soon after it flew into this side from Pakistan. After his capture, a man from the neighbouring country had appealed to the Prime Minister Narendra Modi for the bird’s release.
“We did not find anything suspicious on the pigeon which was caught by the locals; hence we set it free on Thursday,” senior superintendent police (SSP) Kathua, Shailendra Mishra, said.
He said they got the pigeon medically checked by a veterinary doctor as it was frightened and also fed him during his stay.
Habib Ullah, a resident of Shakker Garh in Sialkot, Pakistan, through a video message, claimed that the pigeon belonged to him and on Eid-ul-Fitr, his birds had taken a flight during which one among them had crossed the IB.
He claimed that the code was actually his mobile phone number and he owned a dozen pigeons.
Meanwhile, after the release of the pigeon, former chief minister of Jammu and Kashmir Omar Abdullah asked whether prisoner exchange took place or was it just allowed to fly?
“I believe the “spy pigeon” has been released. Was there prisoner exchange or was it just allowed to fly? Perhaps it’s a double agent now!” he tweeted.