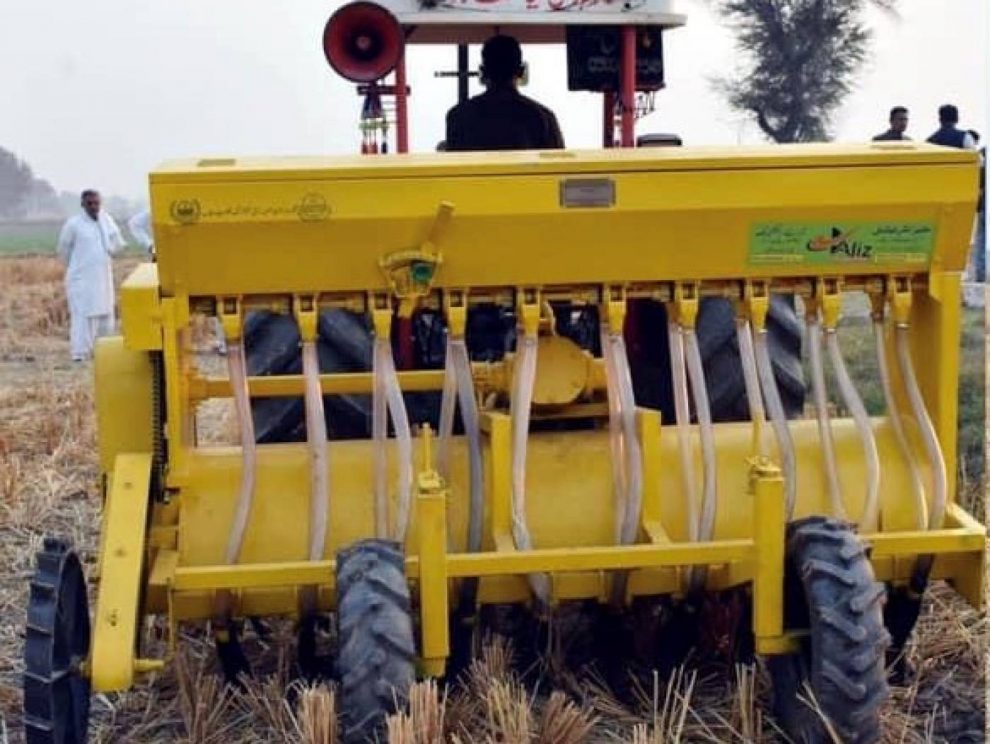 LAHORE, Pakistan: Air pollution is a long-standing problem in Pakistan, but every October and November contaminates in the air in Punjab province shoot up as farmers burn rice stalks left behind after harvesting to clear their fields to plant wheat.

During these cooler months, the provincial capital Lahore, which is surrounded by rice-growing districts, is covered with thick smog.

“It is a health emergency – the air quality monitors in Lahore routinely show hazardous levels in November,” said Farah Rashid, a climate and energy programme coordinator for green group WWF-Pakistan.

Now the Punjab government hopes to tackle the problem by providing 500 rice farmers around Lahore with a set of machines that together eliminate the need to burn crop stubble.

The machines include a shredder that breaks down rice stubble and mulches it into the ground and a seed drill – called the Happy Seeder – that follows to sow wheat through the mulch.

“It’s a useful technology,” said farmer Aaamer Hayat Bhandara, who has used both machines at a friend’s large farm, and has pushed the government to subsidise them.

“These machines used together could really make life much easier for us farmers,” said Bhandara, from Pakpattan in Punjab province.

He explained that rice farmers traditionally use combine harvesters to cut their rice in October, leaving behind about four inches of stubble.

With less than two weeks before they have to ready their fields to sow wheat, burning is the fastest way to clear the land, he told the Thomson Reuters Foundation.

In Pakistan, rice is grown on an area of about 2 million hectares (5 million acres), mainly in the Punjab and Sindh provinces. Many of the fields are cleared by burning every year.

In October and November, Lahore’s Air Quality Index level can jump to over 300, a number that the U.S. Environmental Protection Agency says corresponds to a “health warning of emergency conditions”.

Farmers say the new farm equipment can help combat smog, but note that crop burning produces only a small share of the province’s pollution.

“The stubble is burned only for a few weeks in the winter. It is a fact that the problem becomes worse during this short period,” Bhandara said.

“But farmers are not the only reason for this pollution,” he added.

A 2018 report by the U.N. Food and Agriculture Organization (FAO) on the underlying causes of smog in Punjab noted that agriculture – mainly rice residue burning – accounts for 20% of total air pollutant emissions.

That puts it behind industry, which produces a quarter of the air pollution in the province, and transport, which contributes more than 40%.

Tackling air pollution – and leaving stubble on the soil as mulch, rather than burning it – also has the benefit of reducing carbon emissions that contribute to climate change.

In India, where farmers have been using the rice stubble shredder and Happy Seeder for the past few years, a group of scientists published a report last year stating the technology could cut greenhouse gas emissions by as much as 78%.

Ejaz Ahmad, an environmental expert with the Institute of Urbanism in Islamabad, said any efforts to curb air pollution will benefit Pakistanis.

“The Happy Seeder seems like a useful machine,” he said.

In Mandi Bahauddin district, where famed Basmati rice is grown, Muhammad Afzal, an agriculture officer at Punjab’s Government Agriculture Seed Farm, has been experimenting with the Happy Seeder for the past two years.

Pakistan has penalties for rice stubble burning, including fines of up to 20,000 Pakistani rupees ($125) per acre – but most farmers have little other choice and simply continue the practice and pay the penalty when they are charged.

But a growing number are looking for alternative solutions, Afzal said.

“For those who can’t afford it, bigger farmers are willing to rent out the machines. In the future, more service providers will come up to rent them out,” Afzal said.

One drawback to the machines, he noted, is the need to mount them on the back of a tractor – and not just any tractor will do.

“It requires a large, 85-horsepower tractor,” he noted, something most rice farmers in Pakistan do not have.

Bhandara, the farmer in Pakpattan, said the subsidised machines also are only available in certain districts around Lahore, in the so-called smog “red zone”.

“The subsidised machines should be made available to rice farmers in South Punjab and Sindh as well, otherwise they are too expensive for most farmers,” he said.

Despite the limitations, the Happy Seeder has proven so popular that the government has had 10 applicants for each of its 500 machines, according to Aslam, the climate change advisor.

He said authorities are using a lottery system to decide who gets the subsidised equipment.

The government has plans to expand the Happy Seeder programme next year and cover the whole of the Punjab rice belt by 2023, Aslam noted.

In the meantime, he added, it is already working on a technology upgrade.

“The agriculture extension department has developed a prototype to combine the two shredder (and) seeder machines into one ‘Pak Seeder’, which will be even more effective and efficient” – plus 30% cheaper, he said.

Tropical food farmers must grow more on less land, as climate policy shifts
EXPLAINER- I just got a COVID-19 vaccine. Now what?
Comment