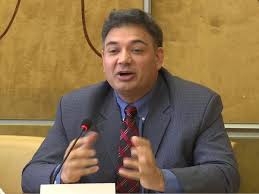 Senge H Sering, a political activist from Gilgit Baltistan, alleged that Pakistan is violating UN Security Council Resolution and it continues to illegally occupy the region.
On 22nd October 1947, tribal militias backed by Pakistan Army invaded Jammu and Kashmir and occupied the region called as Pakistan occupied Kashmir (PoK) and Gilgit-Baltistan. The matter was later taken to the United Nations where Pakistan was asked to withdraw its forces from the occupied territories.
Sering, Director of Institute of Gilgit Baltistan Studies. “Pakistan is an occupier. It does not have any right to interfere in Jammu and Kashmir. It is very clear when it comes to international laws, Pakistan has never fulfilled or respected the UN resolutions and this has slowed down the process that could have given the people of Gilgit-Baltistan in PoJK (Pakistan occupied Jammu and Kashmir) – the same fundamental constitutional rights that the people of Jammu and Kashmir and Ladakh have for the last 70 years.”
He added: “It is very unfortunate that it is Pakistan’s interference in Gilgit-Baltistan that has held us hostage for such a long time.”
People in Gilgit Baltistan have been facing several human rights violations and have remained victims of state atrocities.
After its illegal occupation, Pakistan abolished the State Subject Rule in 1974 and imposed a direct rule of Islamabad in the region.
Although the region was subsumed under the direct rule of Pakistan, the people of Gilgit-Baltistan were not extended any constitutional rights.
Senge further said: “In 1950’s they started violating state subject rule and eventually in 1970’s they made it official with Pakistanis coming and buying land in Gilgit- Baltistan and changed its demography, again it is completely illegal and uncalled for.”
“So, I think India has all the legal rights to work with the people of Jammu and Kashmir and improve their lives and their livelihoods. It could only be done through constitutional measures and that is what India is doing. What Pakistan is doing or has done is completely unconstitutional,” he added.
The activist also emphasized on the fact that Gilgit-Baltistan is an integral part of India. He compared the illegally occupied territory with the newly formed union territory of Ladakh.
“We are part of India, whether you unite as one state or one Union territory or you give us two or three Union territories. We deserve the same provisions in the Indian constitution and should be extended to Gilgit-Baltistan. What shape eventually comes into form is something that we can discuss in the future,” said Senge.
He added, “Right now, I try to equate Ladakh and Gilgit-Baltistan because I see Ladakh is enjoying the constitutional rights in India. So, since we were part of the Jammu and Kashmir state which acceded to India in an abiding manner, then we were the part of the northern province of J&K i.e. Ladakh, Gilgit-Baltistan are constituent parts. So that is why I keep comparing Gilgit-Baltistan and Ladakh”.
There had been widespread criticism by the locals in Gilgit-Baltistan against Islamabad’s denial to provide any political or economic benefits.
Since the launch of the multi-billion dollar China Pakistan Economic Corridor (CPEC) project, the residents of Gilgit Baltistan feel cheated and neglected.
Senge also believes that Pakistan would intensify its proxy war against India after the Indian government has abrogated Article 370.
The activist said, “Pakistan has exposed itself. The International community, including the Muslim world, have realised that Pakistan only uses and abuses in the name of Kashmiri people to enhance and extend its own strategic interests.”
He said: “Pakistan has never done anything for the people of Gilgit-Baltistan or the people of PoJK. If tomorrow Kashmir Valley were to come to Pakistan, they would treat Kashmir valley exactly the way they treat the people of Gilgit-Baltistan.”
“So what Pakistan is doing, it will continue to do the same i.e. the use militant groups, terrorist groups and all these non-state actors to interfere with the peaceful process that the India and international community envision to solve, but Pakistan wants a status quo that is how it benefits from this whole stalemate,” he added.
Gilgit-Baltistan has an unfortunate and tragic history as a region which is a part of the India’s Jammu and Kashmir, but under Pakistan’s illegal occupation since 1947.