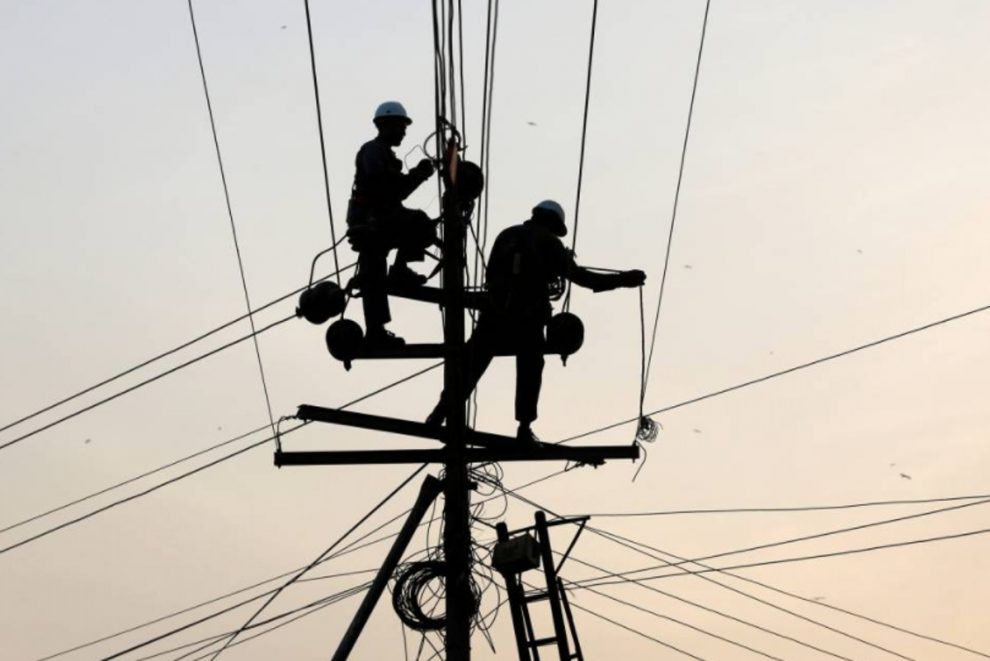 KARACHI, Pakistan: After suffering decades of electricity shortages that left families and businesses in the dark, Pakistan finds itself with a new problem: more electrical generating capacity than it needs.

“It’s true. We are producing much more than we need,” Tabish Gauhar, a special assistant to the prime minister on power, told the Thomson Reuters Foundation by telephone.

But even as supply surges, electric power is still not reaching up to 50 million people in Pakistan who need it, according to a 2018 World Bank report, though expansion of tranmission lines is planned.

Power outages also remain common, with a transmission problem just last month leaving many of the country’s major cities in the dark.

Excess fossil fuel energy capacity also is boosting electricity costs – and raising questions about whether the country will now manage to achieve its climate change goals, with scientists saying coal needs to rapidly disappear from the world’s energy mix to prevent the worst impacts of climate change.

Last year, Prime Minister Imran Khan promised that Pakistan by 2030 would produce 60% of its electrical power from renewable sources.

Currently the country gets 64% of its electricity from fossil fuels, with another 27% from hydropower, 5% from nuclear power and just 4% from renewables such as solar and wind, Gauhar said.

The country has already scrapped plans for two Chinese-funded coal plants – but another seven commissioned as part of the sweeping China-Pakistan Economic Corridor (CPEC) project have gone ahead, and are expected to add up to 6,600 megawatts of capacity to the grid.

China has also funded new renewable energy but at a smaller scale, with six wind farms set to generate just under 400 MW of power, a 100 MW solar project and four hydropower plants expected to produce 3,400 MW by 2027.

CPEC aims to boost road, rail and air transport links and trade between China, Pakistan and other countries in the region, as well as boosting energy production.

Vaqar Zakaria, the head of Hagler Bailly Pakistan, an environmental consultancy firm based in Islamabad, said Pakistan’s coal-heavy power expansion was in line with its own former national aims.

“I think blaming the Chinese may not entirely be fair as setting up projects on local and imported coal was our country policy and priority,” he said.

Officials at the Chinese embassy in Islamabad did not respond to calls and email asking for comment.

As new largely coal-fired plants come online, Pakistan is expected by 2023 to have 50% more power capacity than currently needed.

Because the government must repay loans taken to build the plants and has signed contracts to buy their power, the overcapacity is producing costs “the government has to pay to the power producers under binding contracts, regardless of actual need,” Gauhar said.

“Our fixed-capacity charges have gone through the roof,” he added.

That is driving up rates consumers pay for power – 30% in the last two years, Gauhar said – a problem likely to continue unless Pakistan can find more buyers for its new generating capacity, such as by boosting manufacturing or pushing use of electric vehicles.

The government plans to decommission some older fossil fuel plants to cut overcapacity, he said – but it also pushing ahead to add new wind, solar and hydropower capacity to the grid to meet its climate goals.

The government is holding talks to renegotiate tariff rates with the country’s independent power producers, including fossil fuel, hydro, wind and solar companies, he said.

Whether it will seek similar rate renegotiations on Chinese-funded plants still in the pipeline, or longer debt repayment periods, remains unclear.

When electricity projects now in the pipeline are completed in the next few years, Pakistan will have about 38,000 MW of capacity, Gauhar said.

But its current summertime peak demand is 25,000 MW, with electricity use falling to 12,000 MW in the winter, he said.

Saadia Qayyum, an energy specialist with the World Bank, said energy over-production was a better problem to have than undersupply as it allowed for growth – but the country needed new ways to use the electricity.

But incentivising electric transport, for instance, will be less than a green solution if a big share of the country’s new electricity is produced by coal plants, energy analysts said.

Gauhar said the government is offering discounted electricity tariffs to industrial customers, to try to lure those now dependent on their own gas-fired plants back to the national grid.

But demand for grid power “is a function of price, availability and reliability”, noted Zakaria, the environmental analyst – and high prices are likely to suppress demand and incentivise power theft, a serious problem in the country.

He predicted high-end residential and commercial customers would end up footing the bill for the excess generation capacity, as industries and agriculture receive power subsidies.

That could mean “paying customers will use less electricity, further worsening the situation”, particularly as more see an economic advantage in buying their own solar panels.

Despite the country’s energy surplus, the World Bank is investing $450 million over the next four years in renewable power in Pakistan, to try to cut the nation’s reliance on fossil fuel imports and lower energy costs, Qayyum said.

Gauhar said Pakistan would need some level of fossil-fuel-powered energy in coming years to help balance “intermittent” sources like solar and wind which do not generate electricity 24 hours a day.

But he said the long-term plan, still being discussed, was to have coal plants contribute no more than 15% of the country’s electricity capacity.