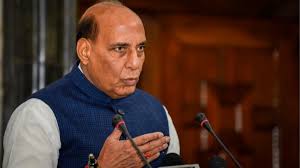 Pakistan continues to remain adamant in the use of terrorism as state policy but India has achieved “substantial success” in working with like-minded countries to not only expose Islamabad’s “regressive policies” but to also make it increasingly difficult to continue with its previous “business as usual approach”, Defence Minister Rajnath Singh said on Thursday.

The minister, who inaugurated diamond jubilee celebrations of the National Defence College (NDC) here today, said that the ability to secure India’s territorial integrity and sovereignty from external threats and internal challenges and ability to create stable conditions for facilitating economic growth were among the four broad principles that are likely to guide country’s quest for national security in the future.

In his keynote address after opening the webinar ‘India’s National Security- a Decade Ahead’, the minister said peace can only be ensured through the ability to deter war.”Perhaps the most fundamental lesson that the roller coaster of the rise and fall of nations taught us was that peace cannot necessarily be achieved by a desire for peace but by the ability to deter war. Unfortunately, the mere desire to seek peace, if not reciprocated by others, does not necessarily succeed in building a harmonious environment in a world beset by conflicting ideas of security, sovereignty and national interests,” he said.

The minister outlined four broad principles that are likely to guide India’s quest for national security in the future.
“The first is the ability to secure India’s territorial integrity and sovereignty from external threats and internal challenges. Second, the ability to create secure and stable conditions that can facilitate India’s economic growth, thereby, creating the resources for nation-building and to meet individual aspirations. Third, we remain steadfast in the desire to protect our interests beyond the borders in areas where our people reside and our security interests converge. And finally, we also believe that in a globalised and interconnected world, a country’s security interests are interlinked by shared and secure commons,” he said.

Singh emphasised that India has proved that countries that employ terrorism as an instrument of national policy can also be deterred through options that were considered un-implementable in the past.
“Pakistan continues to remain adamant in the use of terrorism as state policy. However, we have achieved substantial success in working with progressive and like-minded countries to not only expose Pakistan’s regressive policies but also make it increasingly difficult to continue with its previous business as usual approach,” he said.

Speaking about the evolving and changing character of war, the minister said “a large number of initiatives have been undertaken by us in the recent past in this regard”.