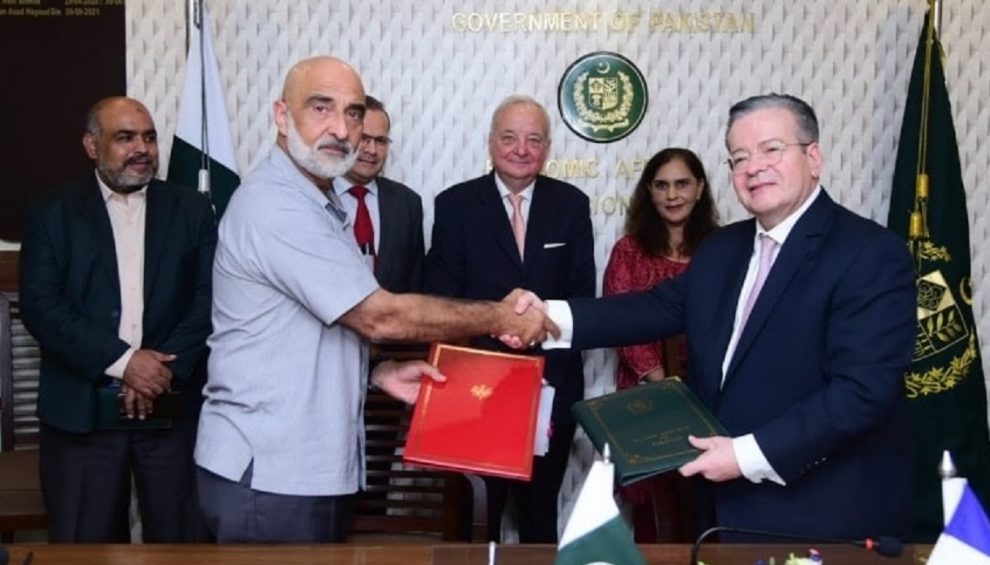 On 27 June 2022, Pakistan and France signed an agreement for the suspension of loans under the G20 Debt Service Suspension Initiative (DSSI). The loans amounting to USD 107 were initially to be repaid between July and December 2021, however, under the new agreement they would now be repaid over a period of six years including a one-year grace period in semi-annual instalments. The agreement was signed between the Ministry of Economic Affairs Secretary Mian Asad Hayaud Din and French Ambassador Nicolas Galey in Islamabad. The Economic Affairs Division in a statement said, “The government of Pakistan has already signed agreements with the French Republic for suspension of $261m. Due to the support extended by the development partners of Pakistan, the G20 DSSI has provided the fiscal space which was necessary to deal with the urgent health and economic needs of the Islamic Republic of Pakistan.”

Previously, in May, Federal Minister for Commerce Syed Naveed Qamar in a meeting with France’s Minister for Foreign Trade and Attractiveness, Franck Riester agreed on strengthening and diversifying trade and economic ties between Pakistan and France. During the meeting, Qamar said that the Pakistan-France trade has witnessed steady growth in recent years. He highlighted that Pakistan’s exports to France were dominated by the textile sector and that there was potential to diversify trade to other sectors such as agriculture, dairy, clean energy, the digital economy, and startups.

A U-turn in bilateral ties
The relations between Pakistan and France drastically deteriorated since 2020 when former Prime Minister Imran Khan accused President Emmanuel Macron of “attacking Islam” by “encouraging Islamophobia” for defending the right to publish blasphemous cartoons in the context of the beheading of a French teacher by an Islamist radical. Pakistan then objected to French legislation labelling it as an “anti-separatism” bill in reference to Macron’s claim that Islamists are closing themselves off from French society by refusing to embrace secularism, gender equality and other French values.

Later, the narrative was picked up by the Tehreek-i-Labbaik Pakistan (TLP) with a series of anti-France rallies. The TLP demanded the expulsion of the French ambassador over the publication of blasphemous caricatures. Due to the threats, French nationals and French companies were advised to temporarily leave Pakistan. Later, in 2021, the National Assembly called to vote on the expulsion of the French ambassador from Pakistan, however, the debate was deferred and not discussed. Additionally, Pakistan’s embassy in Paris has had no ambassador since 2020.

As a result of the severed ties, the relations between Pakistan and France had reached an all-time low in the last two years. However, the two countries have resumed engagement as France agreed to the suspension of loans under DSSI, much-needed assistance for Pakistan. This U-turn in the relations would be beneficial to Pakistan for the following reasons.

First, strengthening trade ties. In 2020, Pakistan exported USD 639 million to France. The main products were House Linens, non-knit men’s suits, and non-knit women’s suits, raking Pakistan 65 in total exports. During the last 25 years, the exports of Pakistan to France have increased at an annualized rate of 2.2 per cent, from USD 371 million in 1995 to USD 639 million in 2020. Thus, Pakistan has the opportunity to strengthen and diversify bilateral trade and economic linkages with France beyond the textile sector.

Second, securing the GSP Plus status. The assessment for the Generalised Scheme of Preferences Plus (GSP+) status for Pakistan is currently ongoing. The support of European member states, especially France would be crucial for Pakistan. Additionally, gaining the GSP Plus 2024 scheme would further strengthen trade ties between Pakistan and France and the rest of the European Union.

Third, support for FATF. Similarly, as Pakistan moves closer to being removed from Financial Action Task Force (FATF) ‘grey list,’ the support from France would be beneficial given its influence in the watchdog. While, France has previously mentioned that it would not give any concessions to Pakistan and that it would ‘objectively evaluate,’ Pakistan would still stand to gain support if the relations between Islamabad and Paris remain friendly.