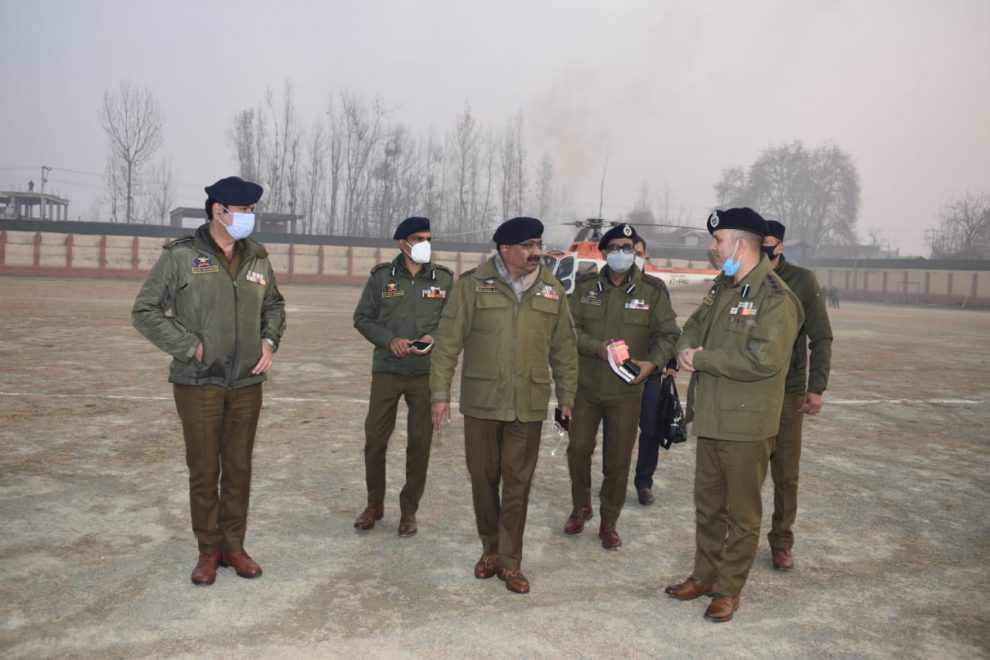 SRINAGAR: The Directorate General of Police (DGP) Jammu and Kashmir Dilbagh Singh Wednesday said that Pakistan agents and their handlers here are trying very hard to radicalise the youth of J&K and involve them in terrorism.

He visited the Pulwama district to compliment Police and Security Forces for neutralising two militants in an encounter today. The DGP was accompanied by IGP Kashmir Vijay Kumar and DIG South Kashmir Range Abdul Jabbar during his visit to district Pulwama. He was received by SSP Pulwama Shri Gh. Geelani Wani, ASP Pulwama Shri Tanveer Ahmad and other gazetted officers of the district.

The DGP while addressing the press conference in Pulwama said that today’s encounter was a successful operation of Police and security forces in which two terrorist commanders of proscribed outfit JeM were neutralised. He said that Yasir Parray, who was known as an IED expert has joined the terrorist group in 2019 and was involved in various terror incidents. He was involved in killing two Army officials and injuring some others in an IED blast.

Complimenting the Police and security forces for successful operation the DGP said that it was a clean operation without any collateral damage. He complimented the local people for their cooperation and behaviour, at a time some people get involved in unlawful activities during encounters, he added.

Earlier on his arrival at Anantnag, the DGP was received by IGP Kashmir and DIG SKR. He chaired a meeting of senior officers and all SDPOs of district Anantnag.

In the meeting, the DGP impressed upon the police officers to strive harder to maintain peace and order in the UT. He emphasized that the police personnel must deal strictly with elements involved in the radicalization of youth and pushing them towards terrorism.

He directed the police officers to identify and book the persons involved in these activities. He directed the officers that people’s cooperation is pivotal for the force to achieve more success on the anti-militancy front and emphasised for better police-public relations.

SSP Anantnag briefed the DGP about the working of Anantnag Police. The meeting besides IGP Kashmir, DIG SKR, SSP Anantnag was attended by SP operation Anantnag.

NC is committed to fight for restoration of special Status, statehood for J&K till the ultimate goal is achieved: Omar Abdullah
Migration of KP families part of ‘movement of officials’, winter vacations in edu institutes: Govt
Comment