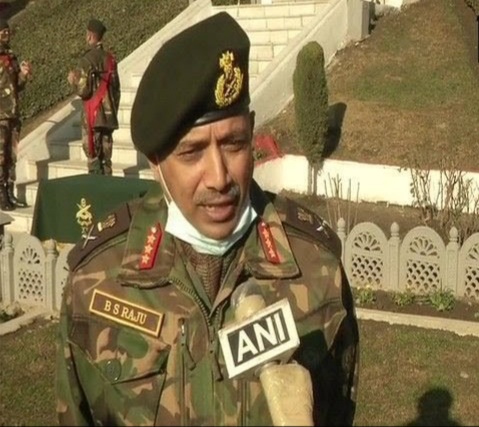 Srinagar: On the occasion of Vijay Diwas, Lieutenant General BS Raju, General Officer Commanding (GOC) Chinar Corps, on Wednesday said that Pakistan has been making efforts to misguide the youth of Jammu and Kashmir.

The GOC Chinar Corps paid tributes to the fallen soldiers on the year-long 50th-anniversary of the 1971 India-Pakistan war in Jammu and Kashmir’s Srinagar.

Speaking at the event Raju said that Pakistan has been making efforts to misguide the youth of the Kashmir valley. He said that the majority of the population here believes in India and a large number of misguided youth have come back to the mainstream. “This gives me a lot of hope,” he said.

Claiming that Pakistan’s desire is to create instability in the Valley, the GOC Chinar Corps said, “It was clear especially after 1971 war that Pakistan wants to create instability in the Valley. Today I have no hesitation of saying that Pakistan’s imagination has not paid any dividend. Today we continue to remain strong and we are able to fail every attempt of Pakistan to destabilise the situation within Kashmir and across the country,” he added.

Vijay Diwas is celebrated every year on December 16 to mark India’s triumph in liberating Bangladesh from Pakistan in 1971.

In one of the fastest and shortest campaigns of military history, a new nation was born as a result of the swift campaign undertaken by the Indian Army.

After facing defeat in the 1971 war, the then Army Chief of Pakistan General Amir Abdullah Khan Niazi, along with his 93,000 troops surrendered.