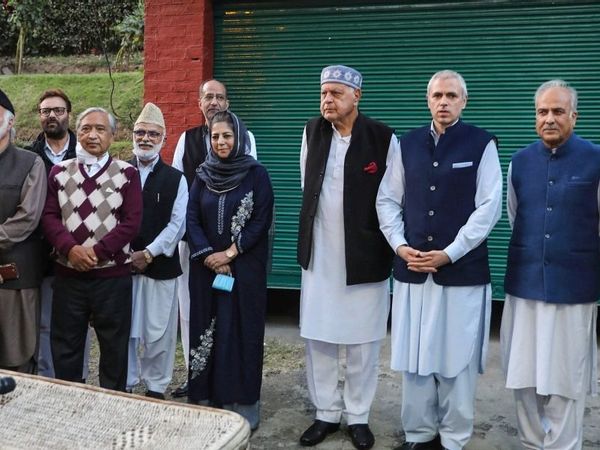 SRINAGAR: Peoples Alliance for Gupkar Declaration (PAGD) Saturday rolled out a white paper on the BJP government’s claims post revocation of Article 370 on development, peace, jobs and investments in J&K stating that all assertions made by the BJP government are nothing but a “bunch of lies.”

The Alliance also termed the Delimitation Commission’s proposals as “unconstitutional” adding that “everything is being done under re-organisation act which itself is illegal as there was already a Delimitation act in vogue.”

Addressing a press conference at Gupkar residence of PAGD chief Dr Farooq Abdullah, the Alliance spokesman M Y Tarigami said that today all members of the alliance including PDP chief Mehboboa Mufti, ANC vice president Muzaffar Shah, other members Justice Hasnain Masoodi and he himself deliberated on certain important issues including the fresh proposals and recommendations of delimitation commission.

“We continue to stick to our station and re-organisation act is unconstitutional and illegal. We continue to stay that August 5, 2019 decision of rolling back Article 370 is unconstitutional. A historic state of J&K was sliced into two halves was nothing but humiliation for every single citizen of people of Jammu, Kashmir and Ladakh,” Tarigami said.

He said article 370 was rolled back amid strict lockdown, internet gag and huge deployment of forces. “Internet was even snapped in Jammu,” he said.

Tarigami said that they were never against delimitation as it was already agreed to have the exercise in 2026. “But this all is being done under Re-organisation act, which itself is unconstitutional. Now delimitation is taking place without Ladakh and seven seats are being increased in J&K—one in Kashmir and six in Jammu,” he said, adding that “basic parameters for delimitation is population based on census, topography and accessibility but all these parameters were thrown to the wind.

He said PAGD fails to understand why seven seats were increased and why not one or nine. “We appeal to the people of India to listen to their conscience and understand the pain of the people of J&K,” Tarigami said.

PAGD’s WHITE PAPER: Stating that claims of Naya Kashmir made by India is based on falsehood and deceit and BJP is doing things at its will by destroying the “historic India.” “It is not new Kashmir the foundation of which was laid by Sheikh Muhammad Abdullah. The foundation set by Sheikh ended autocratic rule and rights were given to the real owners of land and also to the farmers,” Tarigami said. “J&K was the only State and first state where education was taken up to the University level and made free for all.” He, however, said BJP’s new Kashmir narrative entails UAPA, PSA and arrests besides gaging every single voice that objects to its policies.

“Whatever happened on August 5, 2019, was a forced decision. Don’t misconstrue silence of Kashmiris, Jammuites and Ladakhis as acceptance of August 5, 2019 decisions,” Tarigami said. “Article 370 was a bridge between India and people of J&K under the constitution of India. Rolling back special status also hit the relation made at the point when J&K people acceded with India. The revocation of Article 370 was an assault on the constitution of India and J&K’s identity. Tomorrow, Bengal and Tamil Nadu will become another Kashmir.”

He said that term real estate investment can be gauged from the fact how real estate is suffering at the all-India level. “What real estate are you talking? Tell us how many youth from Jammu have got jobs post Article 370 revocation let alone Kashmir,” he said. “We will invite all MPs of the Parliament for a discussion and will also send copies to the President of India.”

He appealed to people of J&K irrespective of their affiliations to understand the nature of assault imposed on J&K. “This assault has become a poison which can reach Tamil Nadu, Andra Pradesh, Punjab and other states. We appeal Indian intelligentsia, civil society, press and all in one to understand the pain of Kashmiris,” Tarigami said, adding that not just BJP, ideology people live in India but there are lakhs of conscious people too—(KNO)