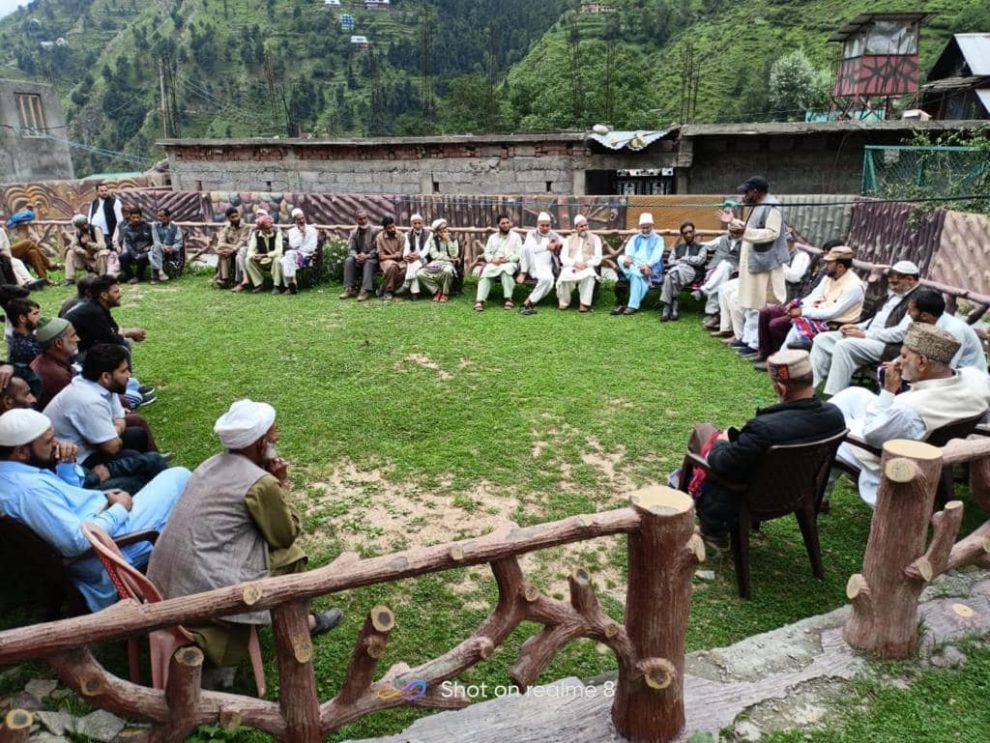 POONCH: Apni Party District President and Ex-MLA Shah Mohammed Tantray today criticized People’s Alliance for Gupkar Declaration (PAGD) for its propaganda to mislead people of Jammu and Kashmir for their political gains.
Tantray was speaking at a public meeting at Block Loran in Poonch District in which dozens of National Conference and Congress Party leaders and workers joined the Apni Party. Prominent among those who joined Apni Party include Riyaz Ahmed Lone, Mushtaq Ahmed, Mohammed Latief Khatana, Nazir Hussain Khatana, Jamal Din, Mohammed Sharief Khatana, Mohammed Sakhi, Mohammed Rashid Khatana, Mohammed Shafi Khatana, Mohammed Bashir, Munir Hussain, and others.
While welcoming them into the Party, Tantray who presided over the programme said the PAGD has played with the sentiments of the people with emotional slogans for the last 7 decades. “In these years, these political parties did nothing for the people and always tried to exploit the sentiments of the people to fulfill their political motives,” he said.
He said that the people should not trust them again and extend their support to Apni Party which represents all the regions equally without any discrimination.
“We work for all the sections of society and represent the aspiration of all the sections of the people,” he said and added that they tell the truth to the people and do not exploit their emotions for political gains like other political parties.
He said that these political parties were responsible for the present day situation in J&K.
Meanwhile, he asked the Party leaders and workers to work among the people and highlight their issues before the authorities for redressal of their problems at the earliest.
On this occasion, ST District President Sarpanch Choudhary Bashir Ahmed, Block President Alhaj Bashir Ahmed Khaki, Sarpanch Aijaz Ahmed Tantray, Sarpanch Haji Mohammed Akram Tantray, Saifuddin Zargar, Manzoor Ahmed Seth, Mushtaq Ahmed Tantray, Haji Abdul Jabbar Tantray and others were also present.
Join The Dispatch Whatsapp Group to stay updated
The Dispatch is present across a number of social media platforms. Subscribe to our YouTube channel for exciting videos; join us on Facebook, Intagram and Twitter for quick updates and discussions. We are also available on the Telegram. Follow us on Pinterest for thousands of pictures and graphics. We care to respond to text messages on WhatsApp at 8082480136 [No calls accepted]. To contribute an article or pitch a story idea, write to us at [email protected] |Click to know more about The Dispatch, our standards and policies