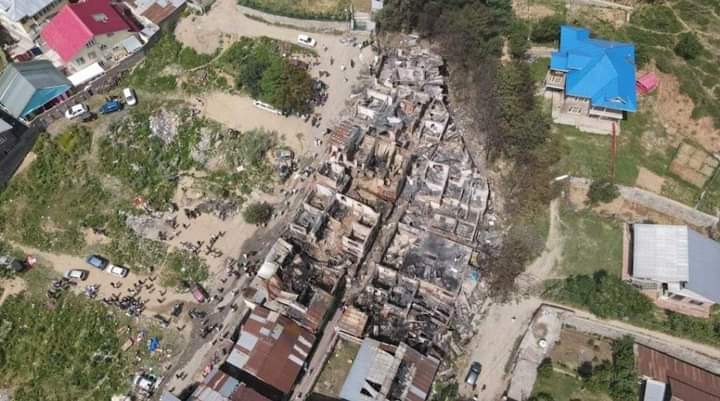 They said that a massive blaze engulfed Sweeper Colony, Noorbagh at around 9:30 pm on Thursday night which spread like a bushfire and left at least 13 houses completely damaged while 31 families putting up in these houses were rendered homeless. Luckily there was no loss of life reported in the incident.

Locals told the news agency, that soon after the fire broke out they informed the fire services department, police and the army. “It was the police that reached the spot first and informed other departments.

Deputy Director Fire and Emergency services Baramulla, Abdul Khaliq told KNO, that as the fire broke out in the areas, fire tenders from Sopore, Sangrama, Rafiabad, and Baramulla were rushed to the spot to douse the flames. “At least 31 families have been left homeless as their houses were turned into ashes due to the deadly blaze,” he said.

Officials from the administration, including Tehsildar, Accountant Officer, revenue officer, fire service, police and other departments have sent teams to review the situation and estimate the damages. Tents and food are being provided among those affected by the fire. “As per the government direction, we will provide compensation to all the affected families,” said Naib Tehsildar Baramulla, Ghulam Muhammad Chopan—(KNO)

Join The Dispatch Whatsapp Group to stay updated
The Dispatch is present across a number of social media platforms. Subscribe to our YouTube channel for exciting videos; join us on Facebook, Intagram and Twitter for quick updates and discussions. We are also available on the Telegram. Follow us on Pinterest for thousands of pictures and graphics. We care to respond to text messages on WhatsApp at 8082480136 [No calls accepted]. To contribute an article or pitch a story idea, write to us at [email protected] |Click to know more about The Dispatch, our standards and policies
Tags#thedispatch #Fire