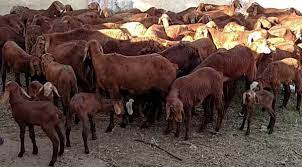 Jammu: Over 900 sheep and goat units have been established in the financial year 2021-22 under the Integrated Sheep Development Scheme (ISDS) in Jammu and Kashmir, officials said on Monday.

ISDS is one of the schemes of the Jammu and Kashmir sheep husbandry department aimed at achieving breakthroughs in wool and mutton production and addressing the problems of unemployment in the union territory.

According to official data, 594 sheep and goat units have been established under the scheme in Kashmir valley, while 329 units were provided to the beneficiaries in the year 2021-22 in Jammu region.

“Under this scheme for establishment of sheep or goat units on participatory mode comprising of 25 ewes/does, livestock is supplied free of cost. Retrieval of equivalent livestock from female progeny is carried out in a phased manner from the third year,” an official of the sheep husbandry department said.

Last year, Jammu and Kashmir Lt Governor Manoj Sinha had said that his administration would provide a major fillip to the animal husbandry sector.

Recently the Jammu and Kashmir government also signed a memorandum of cooperation (MoC) for transforming the sheep farming sector in the union territory.