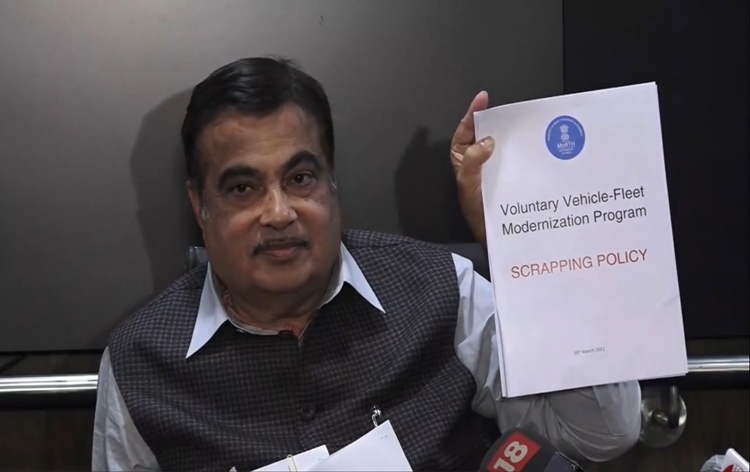 Transport Minister Nitin Gadkari today said, more than 3.7 crore job opportunities will be created in the country with the implementation of Vehicle Scrapping Policy.

He said, additional GST revenue of 30 to 40 thousand crore rupees will be generated through this move.

Making a statement in both the Houses of Parliament, Mr. Gadkari said 10 thousand crore rupees worth of investment will be attracted through this policy.

He said, the policy is aimed at creating an eco-system for phasing out unfit and polluting vehicles.

He said, it will bring transformational changes in the automobile sector by reducing vehicular emission of pollutants.

Mr Gadkari said the scheme will provide incentives to owners of old vehicles to scrap their old and unfit vehicles through registered scrapping centres after producing scrapping certificates.

The Minister asserted that India will become the global leader in the automobile sector in next five years and the country will be able to indigenously produce 100 per cent lithium ion batteries in next one year.

Mr Gadkari sought cooperation from members of Parliament to set up fitness centres, pollution centres and driving centres for vehicles in their respective constituencies.

Highlighting the salient features of Vehicle Scrapping Policy, the Minister said, it is proposed that private vehicles will be de-registered after 20 years if found unfit or in case of a failure to renew registration certificates.

He said, it is also proposed that commercial vehicles will be de-registered after 15 years in case of failure to get the fitness certificates.

He said a disincentive measure, increased fees for fitness certificates and fitness tests may be applicable for commercial vehicles from 15 year onwards from the date of initial registration.

Mr. Gadkari said that rules for fitness tests and scrapping centres will be tentatively notified by 1st October of this year.

The government has also fixed the deadline to scrap vehicles above 15 years of age which are used by the government departments as well as PSUs from 1st April 2022.

For heavy commercial vehicles the mandatory fitness testing will commence from 1st April 2023.

Similarly, mandatory fitness testing will be carried out in a phased manner for other categories of vehicles from 1st June 2024.

Life Insurance Corporation not going to be privatized: Govt
IT minister Ravi Shankar Prasad asserts internet should not become monopoly of few
Comment