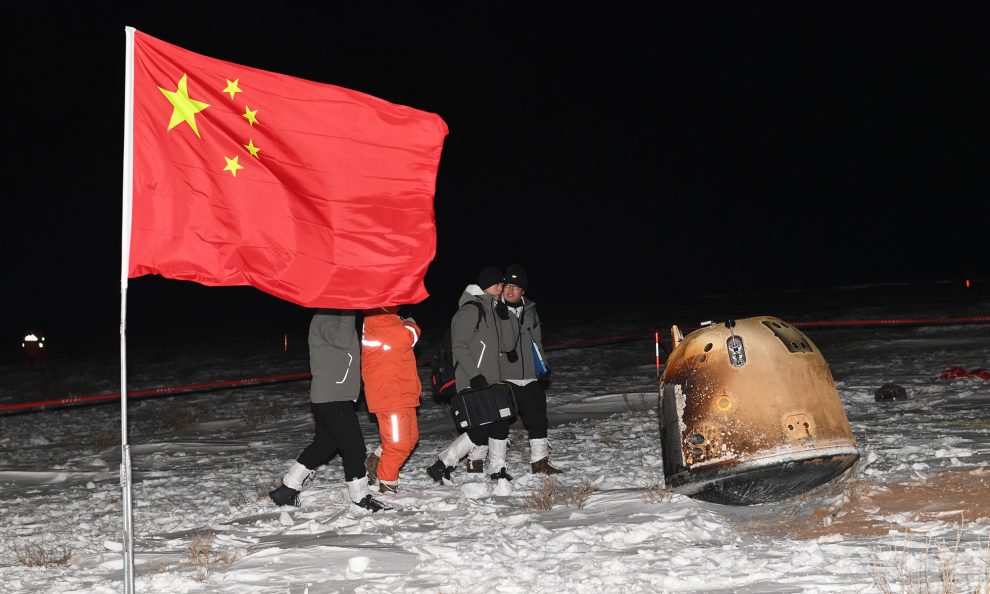 There is a renewed desire to study and map the surface of the moon. This is a potential cause for problems among countries that is unlikely to be addressed using the Outer Space Treaty of 1967 or the Artemis Accords of 2020.

What happened?
The year 2020 saw 111 orbital launches, of which 101 were catalogued launches, and ten failures, as of 19 December 2020. Guatemala, Slovenia, and Monaco launched their first missions during the year. The US stands first with 44 launches, followed by China, with 37 launches, Russia with 16 launches, Europe with five launches, and Japan with four launches, are the top five countries in terms of orbital launch statistics, the majority of which were launched to the lower-earth orbit.

The year particularly saw an increase in private companies’ role in Outer Space, private funders, and integration of technologies and innovation from other sectors have reshaped the way space missions work. Familiar companies such as SpaceX, Blue Origin, Planet Labs, Mapbox, and Spire have recorded amazing outputs from the year. Popularly, NASA’s Commercial Crew Program was seen expanding its relationships with private companies. NASA was seen relying on SpaceX and Boeing to build its human spacecraft missions.

On 13 October 2020, Australia, Canada, Italy, Japan, Luxembourg, the United Arab Emirates, the United Kingdom, and the United States signed the Artemis Accords. Ukraine joined as the ninth member in November. The Artemis Accords are a series of agreements that provide a framework to maintain peace in outer space and govern behaviour on the moon. The accords’ text has 13 sections that talk about 10 principles that would guide future space activities, particularly those relating to the exploration of the moon and other celestial bodies. It is seen in the context of NASA’s Artemis Programme. Many experts warn that it could be the beginning of fierce competition between the signatories on one side and Russia, China on the other.

A vast majority of legally binding proposals on space security generally emerge at the Conference on Disarmament. It has had an agenda item on preventing an arms race in outer space since the 1980s but has often failed due to its inability to agree on a work plan. The United Kingdom, proposed a General Assembly resolution in August 2020 to try and take a different tack on space security. The proposal tries to shift the focus of space security discussions from moving beyond just banning or controlling specific technologies to identifying and looking at actions or behaviours in space to develop a more unified perspective on threats to space security. It proposed to the UN member states to report to the secretary-general what they believe to be responsible and threatening behaviour in space.

The UN General Assembly First Committee adopted the proposal by UK in early November 2020 after surviving opposition from Russia and several other countries. Though achievements such as these are commendable, they highlight the challenges of making progress on space security issues. The debates continue on the need for an updation of the Outer Space Treaty, but no progress was made this year.

NASA’s OSIRIS-Rex Mission landed on an asteroid in October 2020 and is expected to return with samples in the following months. Another mission by JAXA’s Hayabusa-2 returned samples from an asteroid in December 2020. China, sent its first sample return mission to the moon since 1976, using the Long March 5, a recently developed heavy-lift rocket. The mission performed its first robotic lunar orbit mission and returned samples to earth in December 2020.

In February 2020, to study the Sun’s heliosphere, the European Space Agency launched a solar mission. In May 2020, after nearly a decade, the US Space X’s Dragon Mission Crew -1 sent its first crewed flight. A second one, was launched in November 2020. Many space programs announced preparations for their human space missions in the coming years. China conducted an uncrewed flight test of its ‘next-generation’ crewed spacecraft in May 2020 while continuing its preparations the launch of Tianhae Core Cabin Module, in 2021, a part of Chinese Space Station.

Private Launches and Commercialization:
SpaceX had the most successful year for private launches. The company leads not only in the rate of missions but also on the sustainable, reusable technology. Majority of their programs were cargo delivery for the ISS. Private players in outer space are set to redefine the political economics of the domain. NASA has enlisted its private sector to help with its lunar missions. It has awarded contracts to private companies on developing human lunar landers, to SpaceX and Blue Origin.

Lunar Missions and Human Flights:
The focus this decade has shifted towards returning to the moon. This could be due to the significant drop in mission management and technology costs and the increase in the need to study the moon. Chinese missions reached the far side of the moon and successfully returned samples from the moon’s surface. The private entities also displayed the increased interest of the moon missions. Many space programmes and private companies have announced their plans for moon missions and human space missions to the moon for the coming years. India has announced its Gaganyaan mission planned for 2021. NASA’s Artemis Program has a specific lunar focus aiming to send the first woman and the next man to the Moon.

Mission Extension Vehicles:
MEV-1 became the first telerobotically operated spacecraft to service another satellite in-orbit. In February 2020, MEV-1 captured the communication satellites moved to graveyard orbit some months before. The satellites were put back in orbit and are expected to live five more years. In April 2020, MEV-1 bought a deviating Intelsat-901 back in position on the GEO. The telerobotic attempts were a first for technology in outer space, where in-orbit servicing had to be done with human assistance, previously.

These, including the other communications and earth observation satellites, conclude the year 2020. The year was about miniaturization of technology, an increased relevance to private players and commercial purposes. Emphasis was laid on the need to develop reusable technology and plan sustainable missions.

Expectations in 2021
The following decade in Outer Space would be driven beyond just scientific curiosity or national security but would be driven by the economics, competitive commercialization and immediate security challenges to assets in place. Manned missions would become increasingly popular among the national space missions as well as private entities. China’s Space Station would be a highlight in the following years.

One of the issues flagged from the Artemis Accords is that it does not include space powers like India, China, or, Russia. In the recent past, China and Russia have worked together at multilateral forums, space explorations, aerospace components sharing, and technology cooperation. This cooperation is expected to extend with the possibility of compatibility between Beidou and Glconass navigation systems, Chinese Space Station, and treaty negotiations in the following years. China can also gain from Russia’s Deep Space expertise while Russia could bank on Chinese investments.

Reports by Space Experts indicate that there are plans to display technological capabilities of Planetary Defense against the asteroid Didymos that is said to be approaching the earth. Though it is not an immediate threat to the earth’s surface, the decision to display planetary defence capabilities will show the ability of advanced technology that could be used for other purposes as well.

There is a renewed desire to study and map the surface of the moon. This is a potential cause for problems among countries that is unlikely to be addressed using the Outer Space Treaty of 1967 or the Artemis Accords of 2020. Potential problems include overcrowding, interference, terms of ownership of resources, lack of policies that look into information-sharing and legal clarity. The absence of specifications on digging, drilling, collecting samples, or even the need for heritage sites would cause competition or contention among countries. The decade that follows 2020 would redefine the players, possibilities, and the potential of Outer Space.