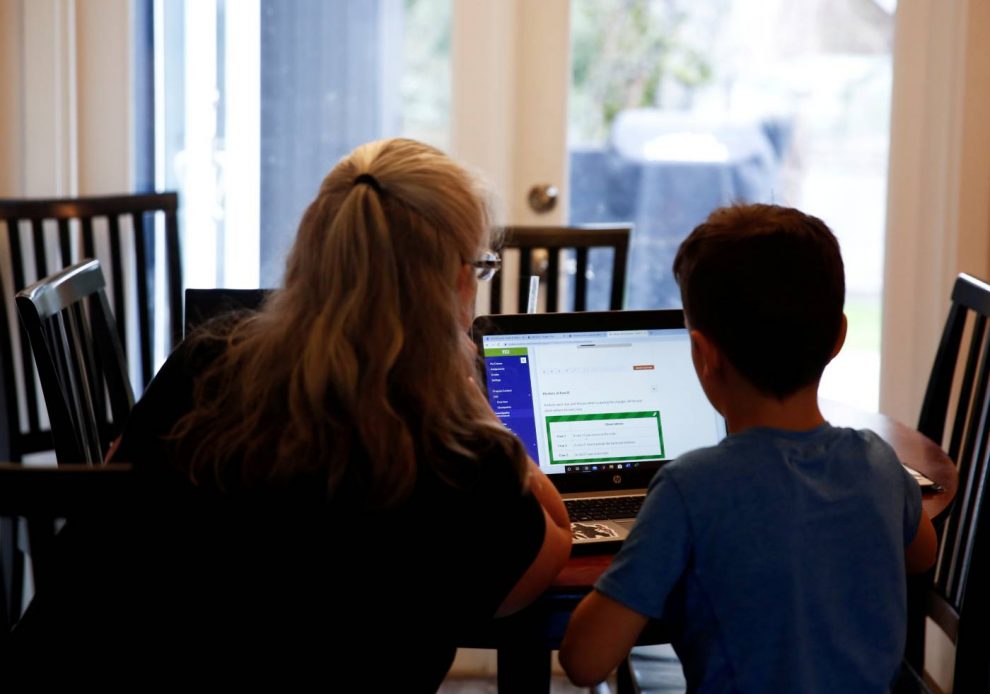 In January Ellie Mitchell started getting a barrage of texts and emails from her internet service provider, warning her she was running out of data.

“It felt like we were being held hostage,” said Mitchell, who was working from home in Baltimore, Maryland alongside her husband and their two children attending school online.

Comcast Corp, one of the largest internet providers in the United States, announced in November it would be capping data usage for residential customers not on an unlimited plan in several cities in the northeast.

Customers who use more than 1.2 terabytes (TB) of data are charged $10 for every additional 50 gigabytes, up to a maximum of $100.

The move drew the ire of elected officials and digital rights activists in Baltimore, who have been calling on the company to make broadband accessible for all students during the pandemic.

With millions forced to work and learn from home, COVID-19 has laid bare the digital divide across the country, with technological inequality disproportionately affecting poor and minority communities.

Some 16 million children, or 30% of all U.S. public school students, lack either an internet connection or a device at home adequate for distance learning, according to the Boston Consulting Group.

“We see (the Comcast cap) as preying on people’s vulnerability,” Baltimore city councilman Zeke Cohen said in a phone interview.

“This decision to add a data cap is particularly harmful to Black and brown people, and poor people, who are already living paycheck to paycheck and can’t afford additional fees.”

A Comcast company spokesman said that only about 5% of its customers would regularly go over the 1.2 TB limit, adding that it had a policy of working with customers on payment plans if they could not afford their bills.

When Baltimore’s public schools first went remote in March 2020, Aliyah Abid was a high-school senior and a member of the group Students Organizing a Multicultural and Open Society (SOMOS), which pushed Comcast to make broadband quicker and cheaper.

“These days, the internet is how you access your education – so, with Comcast we are being asked to pay for a public education that’s supposed to be free,” she said.

“And not everyone is privileged enough to just not think about that.”

In July, SOMOS launched a petition asking Comcast to ensure students in the city could get online for free during the COVID-19 crisis.

Chief among their demands was improving the speed and lowering the cost of the “Internet Essentials” program, a discounted plan for low-income customers that costs $9.95 per month.

That service caps download speeds at 25 megabytes per second (MB) and uploads at 3 MB, speeds that meet the basic federal definition of “broadband”.

“What we are hearing from students is that the speed is abysmal for Essentials,” said Adam Echelman, BDEC co-founder and executive director of the nonprofit Libraries Without Borders.

“This is a real problem right now, because you can’t write an essay on your smartphone – you need a good internet to stay in touch with your teachers.”

Kristerfer Burnett, a Baltimore city councilman who co-signed the letter to the Attorney General demanding the Comcast investigation, said his office was fielding a barrage of complaints from families struggling to get online.

“We are getting bombarded with upset families who are saying that only one of their children can be on the internet at a time,” he said.

Comcast said it would be increasing the Essentials speed this week.

“We’re continually improving our Internet Essentials program and have increased speeds multiple times, including today to 50 MB (and) 5 MB, all while keeping the price at $9.95/month for the last decade,” the company said in an emailed statement.

AT&T, another major internet service provider, previously suspended its data coverage charges through the end of 2020, and announced it would waive the data caps it places on its low-income plans through June 2021.

Like many American cities marred by residential segregation, the distribution of internet to homes in Baltimore is highly unequal, said John Horrigan, a senior fellow at the Technology Policy Institute, a think tank in Washington, D.C.

In his research, Horrigan has found that 206,000 African-American households in Maryland state were without a wireline broadband connection in 2020.

A report he published in May 2020 showed that in Baltimore alone, more than 40% of households did not have a fixed line connection, with many homes using their phones to access the internet.

“Having good internet is extremely important to people’s emotional wellbeing at this time – not having access leads to both economic and social exclusion,” he said.

The primary reason families lack broadband, he said, is that they cannot afford the monthly bill. The new caps, he said, would further entrench the notion that data is a scarce, and expensive, resource.

Comcast is now weathering nationwide criticism of its data caps, which critics see as leveraging its dominant position in the broadband market during a crisis.

According to a 2020 report by the Institute for Local Self-Reliance (ILSR), a group critical of major telecom firms, 22 million U.S. customers living in Comcast service areas have no other option for broadband service.

California congresswoman Anna Eshoo sent the company a letter in December asking it to suspend all data caps until after the pandemic.

Comcast had already waived its caps on data in California and other places states until the end of the 2020 school year.

The company said that the alerts being sent now to customers in its Northeast markets will not translate into additional charges until their August 2021 bill, and the messages were only meant to help customers decide if they should change to a plan with more data.

Unless something changes, Mitchell said she will likely have to start paying the additional $30 a month for an unlimited plan.

“This is our work lifeline, this is our education lifeline – so we either have to ration or just add another thing to our monthly budget,” Mitchell said. “It’s death by a thousand cuts.”