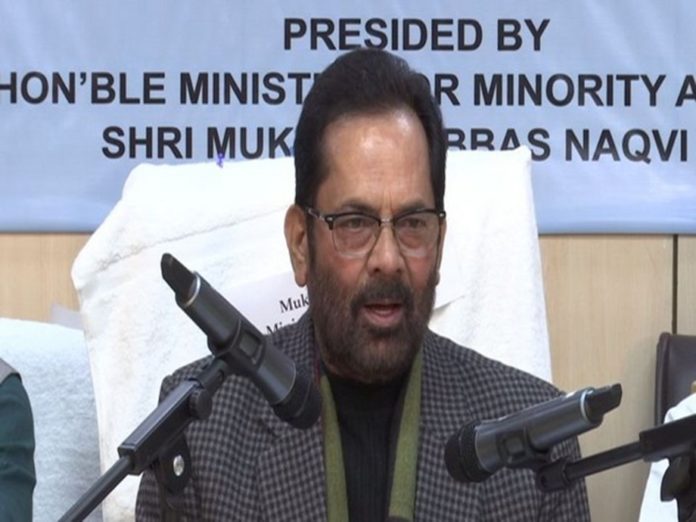 Union Minister of Minority Affairs Mukhtar Abbas Naqvi on Thursday slammed the opposition parties for allegedly misleading people and trying to create a divisive environment in the country over the Citizenship Amendment Act (CAA) and National Population Register (NPR).

“They were first opposing the citizenship act, then they started a fake and fabricated narrative on National Register of Citizens (NRC) and now they are raising question on NPR. Their intention is to mislead people and create a divisive environment in the country for political gains,” Naqvi told ANI.

The Union Minister said that the opposition parties will regret this in the future.They are misleading the people and weakening the unity of the country. The CAA does not revote the citizenship of an Indian. Not to mention, when the UPA government brought the NPR in 2010, they (Congress) celebrated the development,” Naqvi said.

“They claimed to have made a major development by digitising the population register and issuing cards for the same. They are now criticising the same NPR,” he added.

Naqvi asserted that the opposition parties are misleading people and spreading fake news because they are running out of credible issues to target the Central government.”What is the question on CAA. They are asking to include the Muslims in the CAA. The original Citizenship Act dictates how one can get the citizenship of the country. Several people have received citizenship this way and they can continue to do so,” he said.

He said that the amended citizenship law is to grant citizenship to the persecuted minorities in the neighbouring countries.”We are not inviting anyone to the country. We are just granting a way for those who find a threat on their lives over religious persecution an opportunity to live their lives respectfully here,” he said.

Extending comments on the recent violent protests, Naqvi urged the people to maintain peace and said that there is no place for violence in society.Naqvi’s comment comes as several state government have said that they will not implement the Citizenship Amendment Act. Meanwhile, West Bengal and Kerala have also refused to update the NPR.