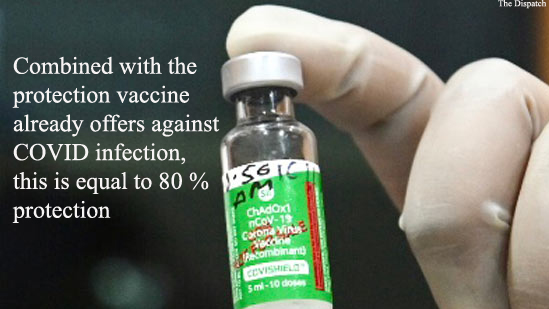 New Delhi: A single shot of the AstraZeneca-Oxford Vaccine (known as Covishield in India) is capable of reducing the risk of death in the recipient by a whopping 80 percent, reveals new study data (reported first by Reuters).

The data was released by Public Health England on Monday. According to PHE, this was the first-ever study to determine the protection against mortality from the AstraZeneca vaccine, when looking at a real-world setting.

For the study, researchers looked at new symptomatic cases of the novel coronavirus between December and April, as well as people who died within 28 days of becoming COVID-19 positive by vaccination status.

PHE explains, “Combined with the protection vaccines offer against becoming a case in the first place, this is equivalent to approximately 80% protection against mortality in individuals vaccinated with a single dose of either vaccine.”

Recipients of the Pfizer vaccine saw improvement against mortality by 69 percent for those who received their second dose at least a week before they tested positive.

Combining this with the estimated protection from getting the virus, the Pfizer vaccine is expected to offer the equivalent of 97 percent protection against death in people who have had both doses, PHE added.

Another PHE report has revealed that one dose of the AstraZeneca vaccine was 73 percent effective in preventing hospitalisation among those aged 80 and over. Pfizer jab on the other hand was seen to be 93 percent effective.

COVID: Why Chopra Nursing Home not being used to cater rush amid spike in cases?
National Technology Day
Comment