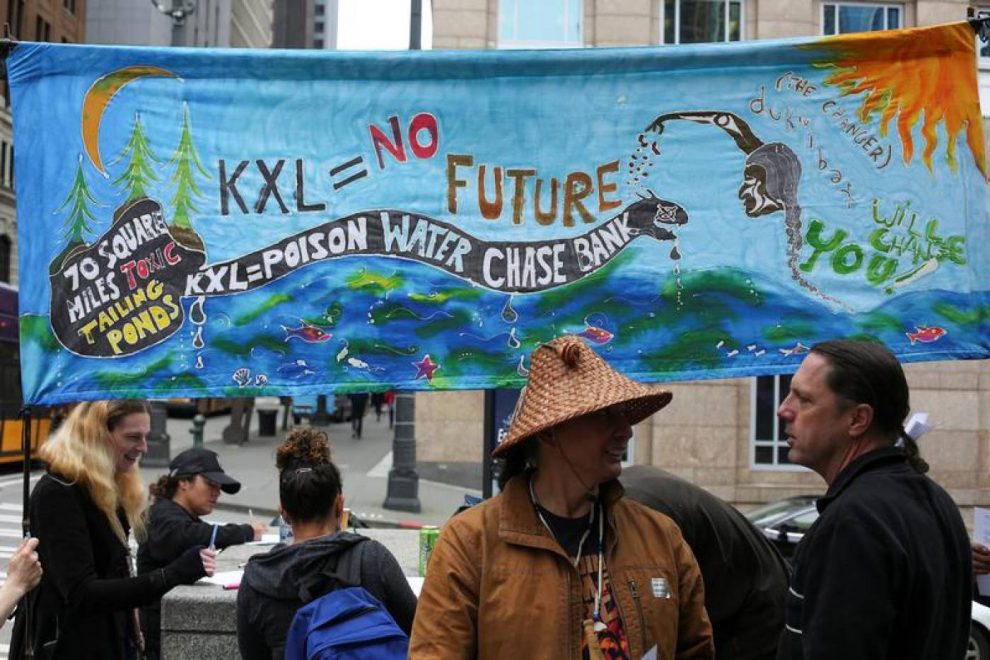 NEW YORK: Environmentalists and labor unions that threw their support behind U.S. President Joseph Biden now find themselves on the opposite sides of a battle over the construction of big pipeline projects between Canada and the United States.

The United States is the world’s largest producer of oil and gas. Biden’s administration aims to transition the U.S. economy towards net-zero carbon emissions by 2050, and his initial moves towards that goal included cancelling a permit for the Keystone XL crude oil pipeline (KXL) and reducing oil-and-gas leasing.

The reaction from Biden’s supporters, however, illustrates the challenge of managing the impact of the energy transition on different communities.

While climate activists celebrated KXL’s demise, labor unions, reeling from the global oil downturn, have mobilized to keep ongoing projects from being derailed.

Mike Knisely, secretary and treasurer of the Ohio State Building and Construction Trades Council, which endorsed Biden, said he has been leaning on state officials to talk to the president about how his rapid-fire climate announcements are affecting his union membership’s support.

“I tell them they need to get back with Biden and ask if this all really has to happen on Day Two of the new administration,” Knisely said. “I just get so frustrated that there’s almost no common ground (on pipelines) with the environmental community.”

Climate groups have had successes in recent years, persuading large investors to reduce holdings in fossil fuel industries, as well as lobbying banks to shun investment in Arctic drilling.

But Biden was endorsed by a number of key labor unions that work on pipelines, refineries and other energy installations, including the International Teamsters and North America’s Building Trades. Those unions celebrated the victory of a pro-labor president, but opposed the Keystone move, and are lining up against threats to the other pipelines.

Environmentalists see Biden as an ally in the battle to wean the United States off fossil fuels and stymie imports of carbon-intensive heavy crude from Canada’s vast oil sands. They are intensifying efforts to shut three other pipelines: Enbridge Inc’s Line 3 and Line 5, and Energy Transfer’s Dakota Access Pipeline (DAPL).

Unlike KXL, these three lines are all currently in service. The Enbridge lines deliver crude oil and fuels from Canada, while DAPL sends crude from North Dakota to the Midwest and Gulf Coast.

A White House spokesman said the Biden administration is reviewing a court decision last week that upheld orders for a lengthy environmental review for DAPL. He declined to comment on the two Enbridge pipelines.

Enbridge is more than doubling Line 3’s capacity to 760,000 barrels per day (bpd), a project supported by Minnesota’s Governor Tim Walz, a Democrat.

To be sure, not all unions backed Biden. Phillip Wallace, business representative for Pipeliners Union 798 in Minnesota, said his union, which supported former President Donald Trump, was concerned the new administration may try to stop the project.

“We have got full construction going right now in Minnesota and I am worried that this new administration could throw a monkey wrench in our gears,” Wallace said. His union is planning on rallies to support construction once COVID-19 restrictions ease.

On Friday, environmental protesters halted construction on a Line 3 work site in Minnesota by locking themselves to each other between barrels of concrete, one of several disruptions so far this year that has resulted in dozens of arrests.

Unions are also ramping up support for Enbridge’s Line 5 pipeline, which runs under the Straits of Mackinac, where Lakes Huron and Michigan meet, and ships 540,000 bpd of light crude and propane. Activists want to decommission the 68-year-old line, while Enbridge is trying to upgrade it to protect the straits.

Enbridge last week received a state permit to build a tunnel to house the line; it still needs permission from the U.S. Army Corps of Engineers.

In November, Michigan Governor Gretchen Whitmer revoked the pipeline’s easement in the straits and ordered the pipeline shut. The United Steelworkers, who endorsed Biden, have been trying to drum up support with legislators to keep the line running.

“The USW strongly supports both the Line 5 replacement segment project and the continued operation of the existing pipeline,” it told Reuters in a statement. “Hundreds of USW members and their communities depend on the good, family-sustaining jobs Line 5 supports.”