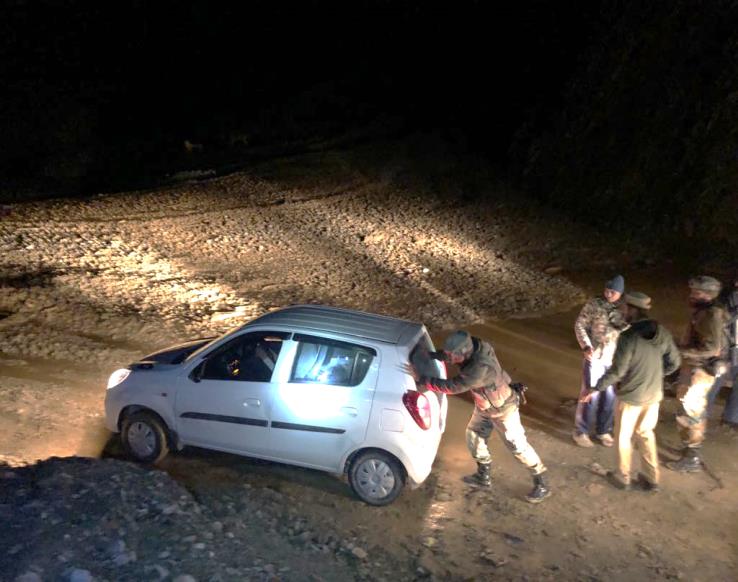 Jammu, Nov 30: Mughal Road connects Bufliaz, Poonch district of Jammu region to the Shopian district of Kashmir Valley. The historical route is being used since Mughal era to cross over Pir Panjal Range at Peer Ki Gali (3,500m) to reach Kashmir valley. Pir ki Gali is though higher than Banihal pass (2,832m), reduces the distance between Shopian and Poonch from 588km via Jammu to just 126km. Peer Ki Gali is named after a Hindu saint who embarrassed Islam and is popularly known as Seikh Ahmed Karim. After independence in 1979, the Govt of J&K took up this project in 1979 and named it the “Mughal Road”. Construction of rd started in 2005 but the work got halted when Bafliaz Bridge on the road was blown up by terrorists. Finally after overcoming all impediments, the 84 Km double-lane road was completed and opened for light vehicles traffic in August 2012.

The opening of road has not only enhanced people to people contact, but has also provided opportunities to locals involved in business and trade. Since the opening of the road there has been a constant increase in movement of people and load carrier’s which at times cross the figure of 1000 vehicles per day. An immediate fallout is availability of fruits and vegetables to people of twin districts of Rajouri and Poonch at almost half the price thus boosting economy of both the regions.‘Kashmiri Wazan’ has now become a standard menu in every celebration in Poonch and Rajouri. Unemployed Post graduate candidates hailing from Kashmir prefer to take up jobs in twin district and a good number of students after completion of their graduation joined University of Kashmir, Central University of Kashmir and Awantipura Islamic university for post graduate courses from the twin districts.

Mughal Road passes through unwavering topography and landscape as compared to Jammu-Srinagar national Highway. The road provides a better link to Kashmir with rest of the country. However, nearly 31 kilometers road remains under snow cover from December to March and also nearly six kilometer of the road is prone to avalanches and landslides. In such adverse and challenging situation, the travelers plying on this route often find themselves helpless as they get caught in snow, avalanche or at time landslides, thus; getting stranded for long hours without any help.

Every year snow clearance job is undertaken on war footing to open this alternative highway for vehicular movement and check posts are established at various places to facilitate smooth flow of traffic. These checks posts are being jointly manned by Army and JK Police. Local populace have very high regards for the security forces deployed in the area who have witnessed daring rescue operations during day and night undertaken by Army and Police. Indian Army has worked hand in hand with civil administration to accomplish unthinkable and have saved many lives. Timely assistance provided by security forces have saved many lives particularly of passengers travelling on this road by providing then warm them food, shelter and medical aid in all types of distress situation like road accident, vehicle getting broken down or vehicle getting struck in snow in harsh weather conditions.

Local people feel a sense of security knowing that security forces are around them to help them in case of any eventuality. With absolute disregards to their own safety security forces often plunge into action and wage robust rescue efforts to assist people and bring stranded to safety. For their devotion to duty, indomitable spirit and unquenchable vigor these men deserve the ‘Valhalla’ of Indian hearts