Elections were held in Karnataka on 12 May 2018. The results were announced on 15 May 2018, triggering hectic political activity. The Congress leaders quickly reached HD Deve Gowda’s residence to extend unconditional support to JD(S) to form the government. The BJP made similar overtures to JD(S) but the senior Gowda declined the offer. Sonia Gandhi spoke to Gowda a few minutes after the BJP’s offer. Both the leaders of the Congress-JD(S) and BJP thereafter met Governor Vajubhai R Vala. Both handed over letters staking their claim to form the government.
16 May 2018: More action followed. While the governor was consulting legal experts, allegations and counter allegations of horse-trading flew thick and fast. After getting wind of what was transpiring inside the four walls of Raj Bhawan, JD(S) moved their members of Legislative Assembly (MLAs) to a safer resort in the city. Simultaneously, the Congress geared up for a legal battle. Around 8:45 pm, the governor invited BS Yeddyurappa to form the government and scheduled the swearing-in for 9:00 am the next day. He ignored the allegations of horse-trading, even though he knew that the BJP must have manipulated the support of eight legislators. How did this happen? The two ways in which that could have been done was to first, engineer a split in the Congress or JD(S) and, second, by encouraging MLAs from the opposition camp to abstain from voting during the trust vote.

Fearing poaching by the BJP, hunting for the vulnerable, the Congress-JD(S) moved their legislators to Hyderabad by a bus as the Directorate General of Civil Aviation (DGCA) declined permission for a special flight. Others in the party knocked on the door of the apex court late at night, challenging the governor’s decision and seeking an urgent hearing by the chief justice of India at night. They wanted to stall the swearing-in ceremony.

A three-member bench heard the arguments from 2:00 am to 5:40 am and refused to restrain the governor from administering the oath of office but made it subject to the outcome of the case.
The court decided to continue with the hearing on the same day later. However, the bench made an interesting observation when Attorney General KK Venugopal argued that the Supreme Court should not ‘enter the political thickets of who was invited to form the government and which MLA extended support to which party during a floor test’. He said that whether an MLA prior to taking oath was amenable to disqualification under the anti-defection law was a grey area. The bench reacted, stating ‘It is preposterous to argue that before the MLAs take oath, they are not amenable to the antidefection law. This means it would be an open invitation for anyone to indulge in horse-trading prior to MLAs taking oath.’ All the actions and observations were streamed live by the media.
17 May 2018: The governor administered the oath of office and secrecy to BS Yeddyurappa at 9:00 am at a simple swearing-in ceremony, missed by both the architects of the Karnataka victory— Prime Minister Narendra Modi and BJP President Amit Shah. The social media went into an overdrive. The popular sentiment was, ‘What is the purpose of horse-trading? To form a stable government!’ Yeddyurappa became the 23rd chief minister of the state and started his third innings by transferring senior officials of the Intelligence Department.
Two Congress MLAs went missing.

In a pressure tactic move, the Congress and its allies decided to launch a campaign in the BJP-ruled states where their claim to form the government as the single largest party had been ignored by the Raj Bhawan. They decided to make fresh appeals to the governors in the states of Bihar, Goa, Manipur and Meghalaya.

Their contention was simple. The sauce for the goose must be sauce for the gander.
18 May 2018: The Supreme Court told the new chief minister to prove his government’s majority on 19 May at 4:00 pm, thereby slashing the 15-day time period given by governor to 28 hours.
19 May 2018: The political drama ended with Yeddyurappa’s resignation after an emotional speech on the floor of the house.
Now the issue that is of concern is, which way is our Indian democracy headed to? Generally, the voter, plagued by despondency in rural areas, cares little about the methods used to form the government, but there has to be some semblance of legality in the entire exercise.
I suggest that if numbers alone have to decide the fate of political parties in the Indian democracy, then lawmakers must work towards evolving a uniform formula, which can neither be tweaked nor twisted arbitrarily by the Raj Bhawan and is applicable in a hung house situation.


If the formation of the government is decided by the majority won by a party or an alliance, then the deciding factor has to be the numerical strength of the party or alliance, whether pre-poll or postpoll. BJP President Amit Shah had further confirmed the speculated horse-trading when he said the BJP could form the government if MLAs were ‘freed’.
In a hung house, only a coalition government is possible without breaking parties that involves allurements, often described as ‘call of conscience’ in politics. Thus, whether pre-poll or post-poll, the group with a majority should be invited by Raj Bhawan to form the government as it would not leave any scope for horse-trading.
What if the JD(S) and BJP had come together in Karnataka? Who would have disputed their claim to form the government though it would have been a post-poll arrangement?

However, if the single largest party is invited, then let there be a rider that MLAs defecting to the ruling party for posts or positions would resign from the seat and seek re-election. The provision in the anti-defection law that allows two-third of the MLAs to form a group after splitting the party should be given a go-by.

This sounds academic, but it is feasible in terms of political ethics.
Imagine the frustration of the newly elected legislators in Karnataka, who had to stay behind locks even before they had celebrated their victory. Their leadership did not trust them though the voters had reposed their trust in them!
The voters will continue to baffle the best of political scientists. Perhaps no one has an answer to what exactly drives a voter’s decision at the polling booth—religious and caste identity, personal aspirations or concern for the country, governance and growth, the leader’s charisma, or the track record of the political parties and their deliveries.
Take the case of Karnataka—the gateway to the South for most political parties. What did voters vote for? They had seen the fate of hung houses—the murky deals, the sordid coalition dramas and then the brutal collapse!

Even in 2004 and 2008, the BJP had emerged as the single largest party just short of the majority mark to form the government.

In 2004, the BJP with 79 seats had failed to form the government and eventually the Congress and JD(S) had come together to form a coalition government under the leadership of Dharam Singh (Congress). It was not a stable arrangement as the JD(S) withdrew support in early 2006.
The BJP had then propped up Kumaraswamy, who became the chief minister with JD(S) support. It was an arrangement in which the two parties decided to share power for 20 months each. Kumaraswamy did not honour the agreement and denied the chair to Yeddyurappa, who had eagerly waited for his day for a total of 20 months.
Inevitably, the President’s Rule was imposed.
In 2008, the BJP won 110 seats, three short of the majority mark. BS Yeddyurappa became the chief minister and to get to the magic figure, 20 MLAs from the JD(S) and Congress were encouraged to resign from their seats, which secured the magic figure that suited the BJP.
Later, Yeddyurappa resigned on corruption charges.
In 2018, the voters once again decided to bring back the same party and the same tainted leader.

The above developments are not exclusive to Karnataka. They have occurred and recurred in several states and will continue unabated.

Indians are an emotional people, and politicians raise emotive issues, touching their sensitive nerve to win support. And when emotions play the leading role, why would a voter think of issues like dynasties in politics which deny space to merit and mettle or coalitions that are formed by manipulations?
Politics indeed has all the masala of a Hindi movie potboiler: plot, lead players and the baddies, chasing slippery power.
For full three decades—from the country’s independence to 1977—the voters had given a clear verdict in favour of the Congress, which had played a pivotal role in the country’s freedom from the British Raj. The opposition did not present itself as a credible alternative at the national level. In states, however, voters started identifying with regional forces finding ‘Dilli door hai’, and the coalition rule at the state level started in 1967.

In two decades, between 1977 and 1999, seven coalition governments, ranging from 13 days to a maximum of 857 days, have been formed at the Centre. None of them could complete their tenure though they were led by political masters like Morarji Desai, Charan Singh, VP Singh, Chandra Shekhar, Atal Bihari Vajpayee, Deve Gowda and Inder Kumar Gujral.

Similarly, in the states, 138 governments were formed; 40 were coalitions and their average life was not more than 26 months.
This book focuses on the games that were played in the formation of coalitions and their collapse. It also highlights the need for uniform laws to deal with hung houses as voters will continue to deliver fractured verdicts.
Political parties have evolved a stable formula for pre-electoral alliances—the Congress-led United Progressive Alliance (UPA) and the BJP-led National Democratic Alliance (NDA) at the Centre, which the states lack. This political phenomenon, in all probability, continue until regional parties remain a force to reckon with in Indian politics. They can’t be wished away by the two national parties as regional forces continue to occupy about 50 per cent of the country’s political space. In 2014, the Congress and the BJP had together polled 50.86 per cent of the total votes. Another 5 per cent was accrued by four of the six national but state-based parties—mainly BSP, Communist Party of India (CPI), Communist Party of India (Marxist)/CPI(M), and Nationalist Congress Party (NCP). Regional parties grabbed the remaining 45 per cent votes.
The chapter of coalition governments in Indian political history started with the rise of regional parties and will die with their fall. This, however, is unlikely to happen in the near future.

The Indian voter has the acumen to balance out power rather than put all their eggs in one basket. Somehow, I am confident that the Karnataka drama will check arbitrary discretion that lies with governors in case of a hung house.

Even in Indian politics, the ending has to be happy like a standard Hindi movie – stable governments and a prosperous society even in a hung house. 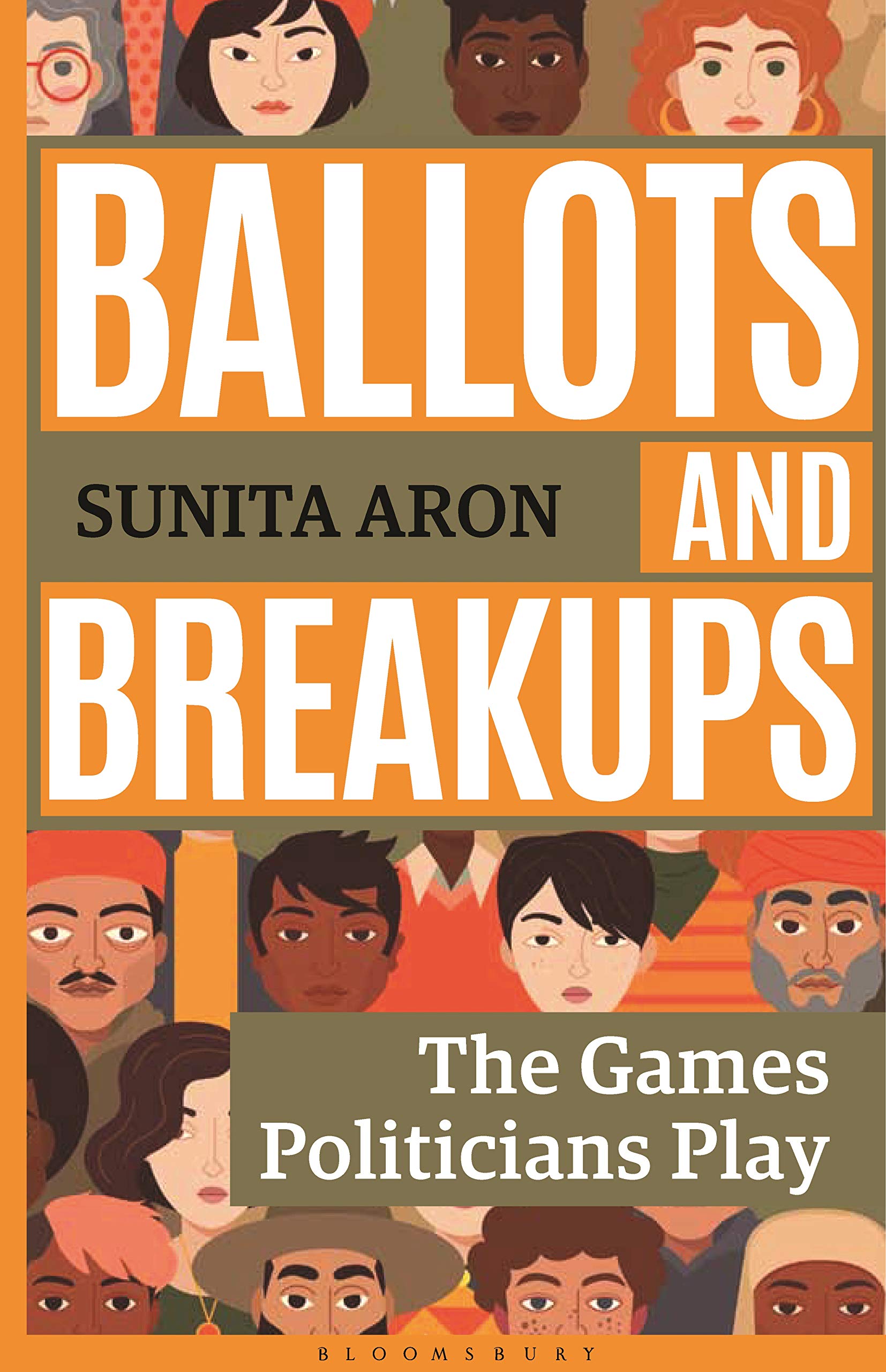 Excerpted with permission from Ballots and Breakups: The Games Politicians Play, Sunita Aron, Bloomsbury India. Read more about the book here and buy it here.

Presenting first-hand accounts of witnesses to the Partition, this book confronts the difficult truths at the heart of Britain's shared history with South Asia
International Booker Prize 2020: Read the opening lines of the longlisted books