In the high-medieval courtly cultures of the western Himalayas, the king and his courtiers went hawking on Roman-nosed horses with hennaed pasterns, escorted by soldiers and attendants on foot scurrying after them. Or so it seems from a riding scene included in the murals lighting up the dim interiors of a Buddhist temple, the Sumtsek, at Alchi monastery in Ladakh. By the time this set of paintings, the so-called early Alchi murals, was painted in the late eleventh–early thirteenth century, the western Himalayas was largely divided between the kingdom of Kashmir and the western Tibetan ones of Ladakh and Guge, all three ruled by local dynasties. Kashmir remained independent even after most of the population had embraced Islam, until it was integrated into the Mughal Empire by Akbar in the late sixteenth century. Ladakh and Guge followed their own historical trajectories based on close connections with central Tibet.

The early Alchi murals reflect the artistic and cultural exchange within the western Himalayas. Furthermore, bordered by the Karakoram range on the north and encompassing the Himalayas to the south, the western Himalayas connected South Asia, Central Asia, China and Tibet through the numerous trade routes that passed through it, and absorbed various influences. The integration of elements of eastern Indian art of the time was a consequence of that. The flamboyant costumes of the patrician horsemen in the painting from Alchi, consisting of multi-patterned robes and breeches paired with knee-length leopard-skin boots, reflect the extension and adaption of Central Asian-Iranian culture into the western Himalayas – either through Kashmir or in tandem.

Horses were transferred into the western Himalayas from Central Asia through the daunting mountainous passes of the Karakoram by doughty traders. Meanwhile, Tibetan ponies spread into the western-central Himalayas with the trade that historically linked it to Tibet, bringing in items such as musk, borax, salt, turquoise and fur on the backs of these surefooted creatures, besides other pack animals. Horses were also raised on the meadows of the western-central Himalayas. To date, there are paths in the Himalayas that only the ponies, sheep, dogs and people of the mountains can traverse – other than the increasing numbers of hikers – as the sight of a shepherd walking jauntily along with his entourage of animals can remind us.

Horses produced in the western-central Himalayas were known in Mughal India as the Gunt, a breed of ‘small but strong’ horses. Gunts were found in Akbar’s stables, although allotted less feed than the statelier horses of Mughal standards, and certainly no ghee, literally the cream of horse feeds in India. In one instance, Akbar received twelve nimble horses native to Kashmir from the Mughal governor of the province. These highland horses were also supposed to be available in Jahangir’s stables. Presumably, they were the same as the Gunt. In the Himalayas, horses were required to transport goods and people rather than form the cavalry of the rulers of the hill states under the Mughal superstructure. In the early seventeenth century, the English traveller William Finch made a note in his diary about the territory of the raja of Kumaon in the central Himalayas: ‘. . . and heere is the great breed of a small kind of horse called gunts . . . a true travelling scalecliffe beast. This prince [of Kumaon] is puissant on foot, but hath few horse or elephants, the mountaines not requiring one and the cold excluding the other.’ The modern recognized breeds of the Zanskari and the Spiti are the remaining signs of the horse culture of the region, both of which have either a straight or a convex profile and are believed to be of Tibetan origin.

Horses with the same distinctive facial cast as the ones in the early art of Ladakh, including the riding scene from Alchi, appear in manuscript illustrations produced under the Pala dynasty of eastern India, datable to about the same period. Besides artistic interaction between the two regions, this also suggests that horses of the same stock were available in both. Indeed, Tibetan horses were also exported through Yunnan in southern China, Burma, parts of Northeast India, Nepal and Bhutan to eastern India, that is, Bengal and Bihar. Known as Kohi or ‘mountain’ horses in the Sultanate period, these horses populated the Indian regions that they entered through, but could be re-exported as far as south India by land or sea from the coastal areas of Bengal. All this while, dealers were bringing Central Asian and Arab-Persian horses for sale in eastern India – the horse population of India in general becoming a mixed bag.

The Tanghan horses of Mughal India probably emerged from the Kohi lot and seem to have been bred all over the eastern Himalayas bordering Bengal and Bihar. In the late sixteenth century, another intrepid Englishman, Ralph Fitch, encountered itinerant Bhutia traders in Cooch Behar, which lies short of the eastern Himalayan foothills. Their home in Bhutan could only be reached after a four-day journey deep into the Himalayas – the mountains of which were so high that from their peaks, ships sailing in the sea could be glimpsed, Fitch was told. He was also informed that Bhutan produced small and sturdy horses, probably the same as Tanghans. Abul Fazl found them ‘strong and powerful’, rating them between the Gunt and Turkish horses. In relation to the ones used on the route from Patna to Bhutan and beyond, the French jeweller Jean-Baptiste Tavernier learned that they were so small that the rider’s feet would skim the ground, but they would resolutely carry on continuously for long distances, requiring little water or fodder.

These horses were sometimes offered as tribute from Bengal to Shah Jahan, the exchange of gifts occupying a special place in the highly refined Mughal court. They were used to express favour or fealty, forge political alliances and diplomatic relations. If gifts from the emperor embodied the extent of intimacy enjoyed by a noble, courtiers clamoured to proffer the most costly or unique of presents to their overlord. Under Shah Jahan, courtly rituals such as the ceremonious giving of gifts were at their most formal. Ponies from Bengal as well as elephants were among the ‘rarities’ of the province given in tribute by two different governors of Bengal, one of whom was the emperor’s son, Shah Shuja, himself. This suggests that these little horses became valued as tokens of Mughal rule in Bengal, the easternmost extent of the empire in the seventeenth century. It was the empire’s ability to marshal resources, commodities and animals from different parts of India and display them in imperial settings that lent it a pan-Indian, cosmopolitan aura. The Bengal ponies were often piebald. And, if Shah Shuja remembered to gift his father twenty of them once on his birthday, it might also have been because he knew that his father had a weakness for piebald horses.

The current Bhutia horse, found in parts of the Indian eastern Himalayas as well as Nepal and Bhutan, has probably descended from Kohi and Tanghan horses, of Tibetan origin themselves. In the absence of breeding stock from Tibet, with historically porous borders between Bhutan and Tibet being sealed, the breed is inevitably endangered in Bhutan. Taller than the Zanskari and Spiti ponies, Bhutia ones bring to mind the distinction made by Abul Fazl between Tanghans and Gunts. Indeed, in the the first half of the seventeenth century, Peter Mundy, a junior merchant of the East India Company, had identifi ed Gunts and Tanghans as one and the same, both being ‘full of mettall, hard bredd and of great endurance’. There is, however, no sign of the piebald horses of the mountains today, although the strain existed until the colonial period.

Excerpted with permission from The Tale of the Horse: A History of India on Horseback, Yashaswini Chandra, Picador India. Read more about the book here and buy it here.

The Dispatch is present across a number of social media platforms. Subscribe to our YouTube channel for exciting videos; join us on Facebook, Intagram and Twitter for quick updates and discussions. We are also available on the Telegram. Follow us on Pinterest for thousands of pictures and graphics. We care to respond to text messages on WhatsApp at 8082480136 [No calls accepted]. To contribute an article or pitch a story idea, write to us at [email protected] |Click to know more about The Dispatch, our standards and policies
TagsHistory of the Horse in India PanMacmillan The Tale of the Horse Yashaswini Chandra 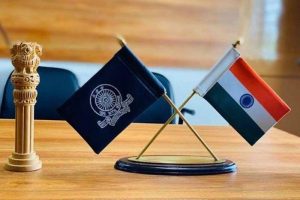