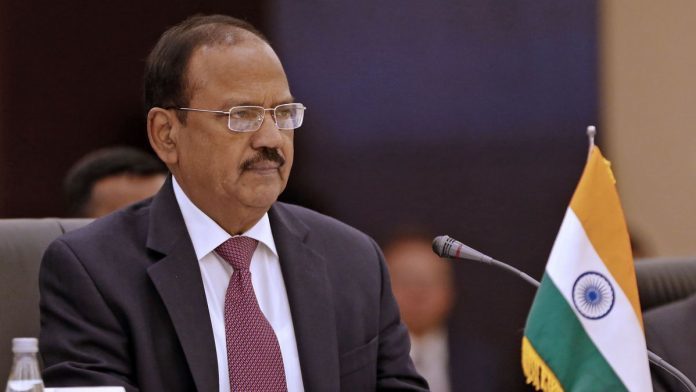 National Security Advisor Ajit Doval Tuesday left the meeting of NSAs of the Shanghai Cooperation Organisation (SCO) members after Pakistan “deliberately projected a fictitious map” of the country in “blatant disregard to the advisory by the host” Russia.

In response to a query at a media briefing, Ministry of External Affairs (MEA) spokesperson Anurag Srivastava said NSA Ajit Doval walked out of the virtual meeting after Pakistan’s representative Dr Moeed Yusuf projected in the background the new political flag of the country that depicts Jammu and Kashmir as a disputed territory, and claims the regions of Sir Creek and the erstwhile state of Junagadh in Gujarat as part of its territory.

“At the meeting of the National Security Advisers (NSAs) of member states of the Shanghai Cooperation Organization (SCO), hosted by the Chair of the SCO (Russia), the Pakistani NSA deliberately projected a fictitious map that Pakistan has recently been propagating,” Srivastava said.

He added that the showcasing of the map was in “blatant disregard to the advisory by the host (Russia) against it and in violation of the norms of the meeting.” After consulting the Russian NSA, Doval left the meeting in protest at that juncture.

“As was to be expected, Pakistan then went on to present a misleading view of this meeting,” the MEA said. Pakistan’s ruling party PTI (Pakistan Tehreek-e-insaf) has claimed that the SCO agreed to its position with respect to the new political map of the country and overruled objections by Doval before he left the meeting in protest.

The new political map of Pakistan was unveiled by Prime Minister Imran Khan on the eve of the first anniversary of the withdrawal of Jammu and Kashmir’s special status under Article 370.

The map depicts the entirety of Jammu and Kashmir as a disputed territory while also incorporating Siachen as part of Pakistan. It does not show any borders in the east of Kashmir, where China has illegally occupied Aksai Chin. It also incorporates Sir Creek into Pakistani territory as well as parts of the erstwhile princely state of Junagadh.

India has rejected the authenticity of the map and called it an “exercise in political absurdity”.

“This is an exercise in political absurdity, laying untenable claims to territories in the Indian State of Gujarat and our Union Territories of Jammu & Kashmir and of Ladakh. These ridiculous assertions have neither legal validity nor international credibility. In fact, this new effort only confirms the reality of Pakistan’s obsession with territorial aggrandisement supported by cross-border terrorism,” the MEA had then said in a statement.