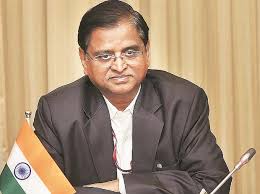 Former Finance Secretary Subhash Chandra Garg said Rs 2000 notes are not much used for transaction and are less in circulation, hence there is nothing wrong in replacing them with smaller currently notes.
Rs 2,000 bank notes account for about one-third of currency in circulation in value terms. They were circulated by the Reserve Bank of India (RBI) in November 2016 after demonetisation of Rs 500 and Rs 1,000 notes. Earlier this month, Garg in a blog had claimed that a large chunk of Rs 2,000 currency notes have been hoarded by people and are not in circulation. “It can be demonetised without causing any disruption. A simple method, depositing these notes in the bank accounts (no counter replacement), can be used to manage the process,” he suggested.
When asked about his blog post, Garg told on Thursday, “Rs 2,000 notes are not being used for transaction purposes. It is seen less in circulation now. If it is not there in circulation and is not much used for transaction, then why not replace it with smaller notes? It’s not a proposal for demonetisation. It is converting Rs 2,000 note into smaller notes.”
“In my post, I wrote that a facility can be provided to people that they can deposit these notes in the bank accounts and take Rs 500 notes in return. Currently, I don’t think there is a need for Rs 1000 notes. Rs 500 notes are sufficient for transactions,” he added.
Garg said that even now, 80-85 per cent small transactions are done through cash in our country.
“These are small transactions, but in cash… Digital transaction is moving forward with speed, every month it is improving, but still it is far… There is nothing wrong in replacing Rs 2,000 notes will smaller ones,” he added.
Garg also suggested that there is a lot of physical gold in the country and there should be a system through which people can convert physical gold into financial gold.
” There are several estimates that physical gold is equal to 25,000 ton… It would be better if a system is made through which people can convert physical gold into financial gold so that whatever expectations people have from gold, they get those features,” he said.

Newsfeed TheDispatch Staff - September 27, 2020
Leh: An influential organisation of Ladakh Sunday withdrew its call for a boycott of the Ladakh Autonomous Hill Development Council polls in...