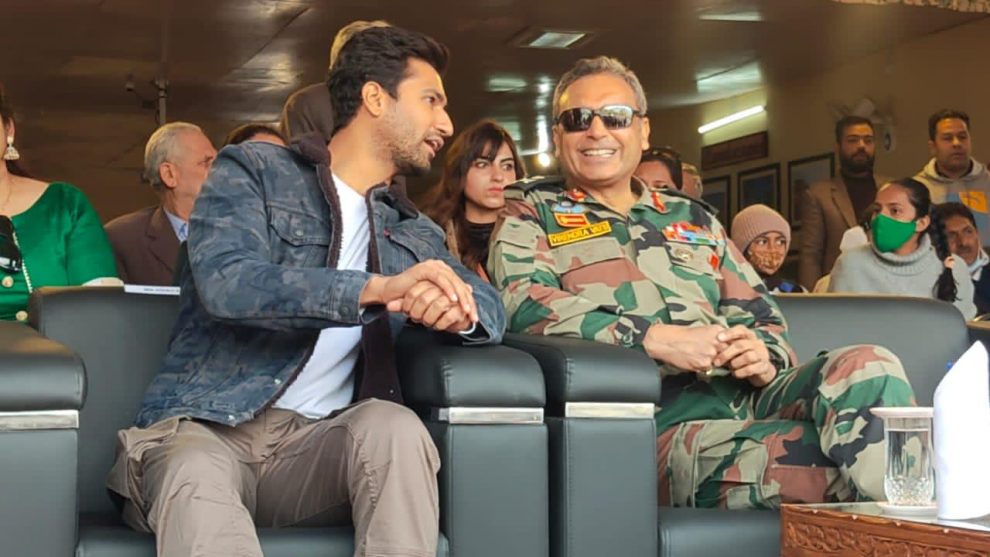 Uri, Mar 07: Bollywood celebrities who Sunday attend “Umeed Ki Sehar” event in Uri area of north Kashmir’s Baramulla district said that Bollywood must make a comeback to Kashmir and there are no words to describe the beauty of this piece of heaven.

Bollywood celebrities including Vickey Kaushal and Sonali Chauhan attended an event organised by the Indian Amry at Uri. GOC Dagger Division, Varinder Vats was also present on the occasion.

As per the news agency—Vickey Kaushal while addressing the gathering said that he was happy to be in Kashmir and it’s only because of the Indian Army, who are the real heroes, that he visited Kashmir for the first time.

Vickey said that recently Anil Kapoor came to know that he was going to Kashmir, he (Anil Kapoor) asked him to take him along and almost every actor looks for an opportunity to visit Kashmir.

“As and when someone arrives in Kashmir he  or she never wants to leave this beautiful place,” he said.

Sonali Chauhan while addressing the gathering said that it was impossible to describe Kashmir in just a few words as it’s more beautiful than that.

She told reporters on the sidelines of the event that it was an honor to be in Kashmir and the Indian Army invited her to attend the ‘Ummed Ki Sehar’ event at Uri.

“I hope that I will be coming to Kashmir very often and there is a lot of local talent. I got to witness all this for the very first time,” she said

While appreciating the beauty of Kashmir, Sonali said that her first movie was Jannat but it’s for the first time she witnessed Jannat (Kashmir) in real.

Meanwhile, talking to reporters on the sidelines of the event, General Officer Commanding (GOC), Dagger Division, Varinder Vats said that organising an event like “Umeed Ki Sehar” was a long pending demand of locals of Uri as no such program was organised here.

He thanked the local population for the cooperation that led to the success of the event.

He said that this is a remote tehsil and the local talent here somehow remains deprived in the absence of a platform to showcase their talent.

The GoC said that the two promising starts from Bollywood decided to come to Uri for the first time and it’s for the very first time any Bollywood celebrity as visited Uri. “Both actors will inspire the youth here and the relation between Army and Awam is itself an example,” he said.

The GOC said that more such events will be organised in the times to come to push youth forward and inspire.

Army had organised a cultural event ‘Umeed Ki Sehar’ where local artists showcased their talent and the students of AGS were also felicitated at the event.